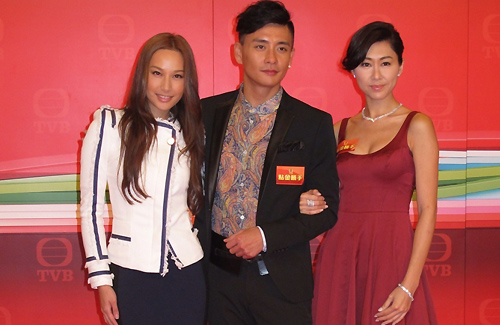 Bosco Wong (黃宗澤), Kate Tsui (徐子珊), Nancy Wu (胡定欣), Ben Wong (黃智賢), Elena Kong (江美儀), and other cast members of new TVB drama, Midas <點金勝手>, appeared at a costume fitting in TVB City today. Kate revealed her role will give her the opportunity to try something fresh and different. She and Nancy will portray a lesbian couple with an ambiguous relationship.

The media sparked many rumors regarding Bosco and Kate in the past. Collaborating with Bosco once again, Kate laughed and remarked, “He has been having non-stop rumors. I even thought of giving up this series, because I can’t stand it! When I first heard Bosco would be starring in it, I wanted to leave immediately. But this role is really captivating. There’s a lot of room for me to develop as an actress. Honestly speaking, Bosco is a great partner. The audience loves him as well. Hopefully there will be new sparks, but please keep the rumors away. I’m certain I won’t like guys who are younger than me.”

In Midas, Nancy and Kate will have many intimate scenes, in which Nancy expressed she does not mind. “I don’t think I’ll feel awkward. In fact, I’m quite happy about it. Kate is famous for her thick round lips. I really want to try it out! But the producer did note the theme of the drama would be quite sensitive. Maybe there will be slight changes of awareness for the audience to understand why we’re doing this.”

Recently, tabloids claimed Bosco and Nancy were not on good terms and avoided each other on set Mr. and Mrs. Bean <貓屎媽媽>. Allegedly, it was because Bosco wished to get back together with Myolie, but Nancy prevented it from happening. Although Bosco and Nancy portray a couple in the drama, Bosco expressed he was certain there will be no rumors. Is it true that they are not fond of each other?

In regards to Bosco’s remark, Nancy laughed and told the press, “Of course he isn’t worried about rumors. I’m definitely not one of his options! But that’s a good thing, because it means I can just focus on filming.”