Kelly Fu Flirts on Set of “Captain of Destiny” 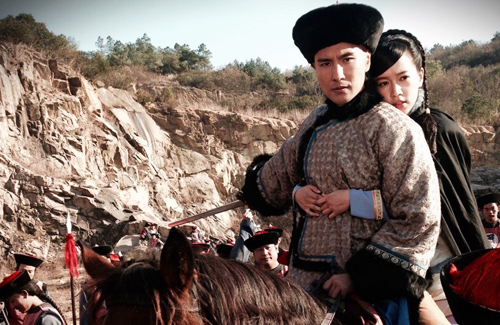 Model-turned-actress Kelly Fu (傅嘉莉) possesses a killer body and is quite popular among her male co-stars. Formerly linked with Ron Ng (吳卓羲) on the set of Triumph in the Skies 2 (衝上雲宵II), Kelly apparently set her new target as Ruco Chan (陳展鵬) during the filming of Captain of Destiny <張保仔>.

Kelly has numerous scenes opposite Ruco in Captain of Destiny. Since Ruco and Kelly have many scenes together, Kelly would grasp on to this opportunity to get close to Ruco. In Hengdian, Kelly was spotted gluing herself by Ruco’s side on and off the set. She often grabbed Ruco to take photos together during their filming breaks.

Since Ruco stars as the main lead of the drama, he is often occupied with a busy filming schedule. Although Ruco is her top target, Kelly also did not let other male co-stars out of her eye. While Ruco is busy filming, Kelly would then turn her attention to Joel Chan (陳山聰) and even the married Otto Chan (陳志健). She was spotted wiping Joel’s forehead and asked Otto for workout tips at the gym.

Although Joel often initiated dinners with the crew after filming, many of the drama’s actresses, such as Katy Kung (龚嘉欣) and Mandy Wong (黃智雯) often do not tag along. However, Kelly did not mind joining the all-male gatherings after filming and went supermarket shopping with the men. Kelly got along well with the men and was seen flirting with them frequently.

In contrast, female lead Grace Chan (陳凱琳) distanced herself from the rest of the cast. With her mother tagging along to Hengdian to take care of her on the set of Captain of Destiny, Grace was reportedly unpopular among cast members because of her frequent outtakes. An insider spilled, “Grace was promoted to leading actress quickly after winning Miss Hong Kong, so many actresses [do not like] her and will not even say hello when they see her face-to-face.”