Kenneth Ma is a “Gluttonous Detective” in New Drama 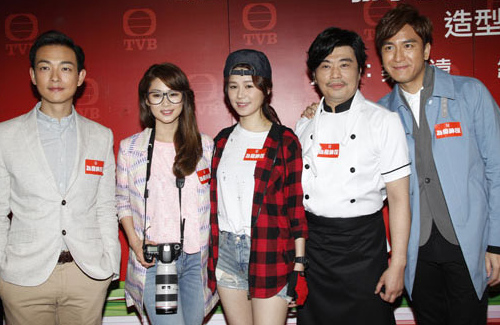 In new TVB drama Gluttonous Detective <為食神探>, Kenneth Ma (馬國明) portrays a lazy kitchen chef who often daydreams about being a top private investigator. After getting fired, he learns how to be a detective through Louis Yuen (阮兆祥), who portrays a former cop.

The comedy features a refreshing cast combination, which includes Eliza Sam (岑麗香), Priscilla Wong (黃翠如), Elvina Kong (江欣燕), Oscar Leung (梁烈唯), Jacqueline Wong (黃心穎) and Oceane Zhu(朱璇). Kenneth said his character believes he is a ladies’ man, but in reality he is always being pushed around by women. His character will develop an obvious crush on Eliza Sam, a reporter who does things half a beat slower.

While Eliza has Kenneth to be her “guard” in the series, Eliza said her real life is rather dull. “I don’t have anyone to buy food for me or clean up my house. I’m independent and I like to do everything on my own.”

Asked if Eliza has had any crazy pursuers, she said, “Never, and especially not since I came to Hong Kong. I don’t even have time to meet anyone, but that’s fine. I’m not in a hurry.”

Unlike her previous roles, Priscilla Wong portrays a crude truck driver who grew up with gangs in Sham Shui Po. She has a vulgar mouth and a large tattoo on her leg. “I was very excited when I knew I had the role,” Priscilla said. “It’s something I’ve never done before.” Priscilla said her role will be testing television boundary limits, as she will be speaking profanity. “We’ll have to see if it can be allowed. Maybe we’ll distort the pronunciation of certain words.”

Priscilla said she is quite a tomboy herself, expressing that her boyfriend, Edwin Siu (萧正楠), is even more proper than her. “I’m really a tomboy. I don’t think there’s anyone around me who can be as rough.” Priscilla said she is not afraid that the role would ruin her image, “I don’t have an image to ruin! If I am afraid, then that’s not very professional.”