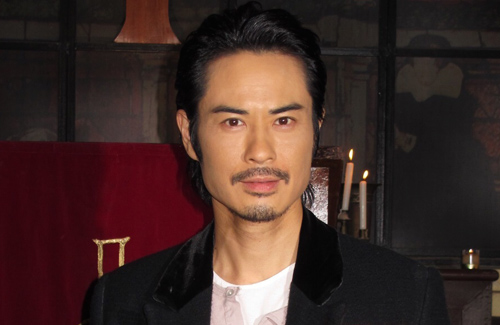 Returning from Chengdu, Kevin Cheng (鄭嘉穎) treated the cast and crew to dinner while watching the finale of Eye in the Sky <天眼> tonight.

Although upcoming TVB drama Blue Veins <殭> has received a lot of attention, it has also been plagued with allegations that it plagiarized ATV’s My Date with a Vampire <我和殭屍有個約會> and Hollywood’s American Beauty <美麗有罪>.

Kevin said, “This is TVB’s strong point; it has always been like this. [Plagiarizing allegations] didn’t start with this drama. Of course there will be some similarities, but that is okay as long as the content is different.”

Costarring alongside many young and beautiful actresses such as Grace Chan (陳凱琳) and Jeannie Chan (陳瀅), lead actress Kay Tse (謝安琪) reportedly focused more on touching up her looks and freshening up rather than on practicing her lines. Due to her multiple outtakes, it was reported that Luk Wing (陸永) was extremely unhappy with her.

Kevin explained, “I’ve never seen Luk Wing upset. I always have outtakes, so what’s the big deal? The person with the least outtakes is Wayne Lai (黎耀祥). Eleven or twelve years ago, I filmed Trimming Success <飛短留長父子兵> with him and he never had any outtakes! Stephen Wong (黃嘉樂), who portrayed my brother in the drama, and I were not happy. Finally when Wayne had an outtake, we both started clapping!”

When asked whether he felt that Kay was too inexperienced, Kevin said, “That’s normal. We cannot expect a newcomer to not have outtakes. There is only one Wayne Lai in this world. Outtakes are very normal.”