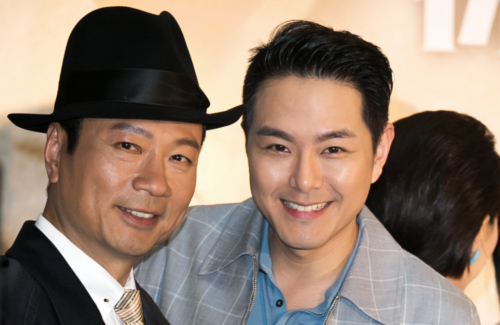 Bullet Brain is a fantasy detective drama that takes place in sixties British Hong Kong. Wayne stars as the titular protagonist Columbo, a detective whose intelligent shoots up a tenfold after he gets shot in the head by a bullet.

Tim Gor stressed that while Bullet Brain is amusing in nature, the drama should not be viewed as a complete comedy. Instead, Tim Gor labeled the drama as “quirky and fun.” Aiming for his drama to look refreshing and unique for the audience, Tim cast western actors, such as Brian Burrell and Corinna Chamberlain, and have them take part in major supporting roles.

Corinna Chamberlain, who shot to fame after starring in Inbound Troubles, stars as Ngo Ka Nin’s English wife in Bullet Brain. Corinna exclaimed that she gave her first onscreen kiss to Ka Nin and was very worried during the shoot. As the scene was filmed outdoors, many onlookers surrounded the filming area, and Corinna almost had a nervous breakdown.

Ka Nin praised Corinna’s flexibility and called her kissing as “skillfull.” Recent reports indicated that Ka Nin touched the side of Corinna’s breasts during their kiss. Ka Nin said in surprise, “I don’t think I touched anything!”

Corinna assured, “He didn’t touch anything! Ka Nin is very professional and took care of me very well.”

What’s the difference between kissing an Asian and a Caucasian? After a moment’s thought, Ka Nin said, “[Corinna’s] nose is very tall so it’s in the way!”

Edwin, who was spotted at the Sha Tin Racecourse with his rumored girlfriend, Gigi Ho (何傲芝) last Monday, clarified that he was only there with her to support a mutual friend.

Was this Edwin’s way of announcing his relationship with her to the public? “You mean relationship with the horse?” Edwin laughed. The A Great Way to Care 2 star clarified that Gigi is just a rumored girlfriend. “I heard she plans to raise a horse. I will support her.” Will Edwin sponsor her? “Yes, with my spirit! When it’s her time to race, I will attend the event!”

Joel Chan’s (陳山聰) recent alleged breakup with heiress Florinda Ho (何超雲) has raised questions concerning Joel’s future, particularly with his career at TVB. As one of Tim Gor’s favorite artists, Tim Gor assured that he will cast Joel in his upcoming productions should he ever return to TVB.

“The last time we’ve seen each other was two to three months ago. I will definitely use him [in future dramas] if he ever decides to return to TVB. There are some characters that only [Joel] could do well in, such as his boastful role in The Last Steep Ascent <天梯>. He was perfect.”

What if Joel fell in love with another and leaves TVB again? Tim Gor expressed his confidence in Joel, saying, “He was already dating [Florinda Ho] at the time [of filming The Last Steep Ascent], but he didn’t leave [TVB] until after he finished shooting the drama. I’m not worried.”