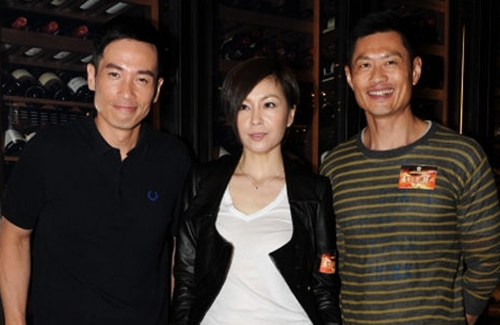 TVB’s major production Beauty at War <金枝慾孽貳> made a weak debut last week, averaging only 23 points, trailing behind low-budget sitcom Come Home Love <愛·回家>. Despite the low ratings, cast members praised the series and are confident that viewership will increase as the story unfolds.

At the drama’s promotional event on today, Christine Ng (伍詠薇) complimented producer Jonathan Chik (戚其義) for his refreshing filming technique. Christine took the ratings with a grain a salt and pointed out that every series has its share of fans and critics. She believes that the ratings will improve later on, and that they will be able to generate more “noise” when Ada Choi (蔡少芬) returns from her maternity leave.

Kenny Wong (黃德斌), who also celebrated his 50th birthday at the event, revealed that he had no expectations to begin with and is therefore not affected by the low ratings. “The series have yet to dig deeply into the plot, and the audience didn’t have time to digest [the story]. [War and Beauty < 金枝慾孽>] left a more profound impression so it is normal to receive these ratings.”

When asked about viewer complaints that the characters’ mind-games could potentially affect young people’s psychological development, Kenny responded, “It depends on their parents’ guidance. The series reflect true human nature. The audience is confused because they are not used to this type of portrayal. Is it really this difficult to understand?”

Moses Chan (陳豪), who plays Kunqu opera master Ko Lau Fei, also finds the ratings reasonable and is not too worried about the series’ success. Moses recently purchased a luxury property in Tai Po worth $33 million HKD, causing speculation that he is building a “love nest” with girlfriend Aimee Chan (陳茵媺).

Asked if he had sought out Aimee’s opinion regarding his purchase, Moses’s face visibly brightened as he shared his future plans. “Aimee is working overseas and has yet to return to Hong Kong. There is no need to discuss with her yet. I really like the house, it is very nice.” Reporters then asked if Moses is looking to share his home with Aimee. He replied, “I haven’t decided if I will move in or rent it out. After all, we date because we want to get married. I understand that everyone is very anxious [about any marriage plans]. I also wish I have good news to share with all of you!”