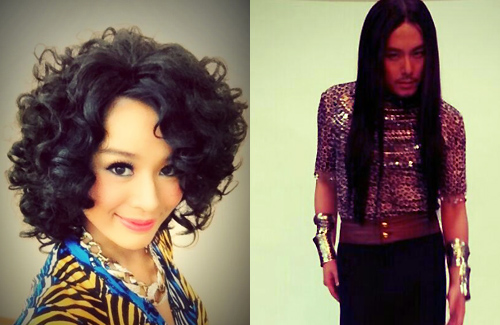 One of Hunan Broadcasting System’s most popular game show, Your Face Sounds Familiar <百变大咖秀>, recently invited a string of Hong Kong TVB stars to record several episodes for their show. Hosted by two of China’s highest-paid presenters, He Jiong (何炅) and Xie Na (谢娜), Your Face Sounds Familiar is mainland China’s version of the original Endemol-produced entertainment show, in which well-known personalities appear on the program to impersonate various celebrities.

In the past several weeks, HBS has invited numerous TVB stars to guest star in an episode, which included Lai Lok Yi (黎諾懿), Leanne Li (李亞男), Mimi Chu (朱咪咪), and the Three Gods trio – Louis Yuen (阮兆祥),Wong Cho Lam (王祖藍), and Johnson Li (李思捷).This week, HBS has invited Myolie Wu (胡杏兒) and Edwin Siu (蕭正楠) over to the show, and their starring episode will be aired this Thursday.

Now back in Hong Kong, the costars will return to TVB Studios and prepare for the shooting of the highly anticipated blockbuster drama, Rosy Business 3<巾幗梟雄之諜血長天>.

Having to sport a boy cut for Triumph in the Skies 2 <衝上雲宵II >, which is slated to air this summer in Hong Kong, Myolie expressed that she hopes to grow out her hair for the filming of Rosy Business 3. To have long hair again is also Myolie’s dream this year, exclaiming, “It’s been too long. I really want to be feminine again!”

Although Myolie is single again and has openly decreed that she is welcoming all pursuers, she admitted that she is afraid to go on dates again. In January, Myolie professed that she was observing a new pursuer of hers, but they decided to become friends only.