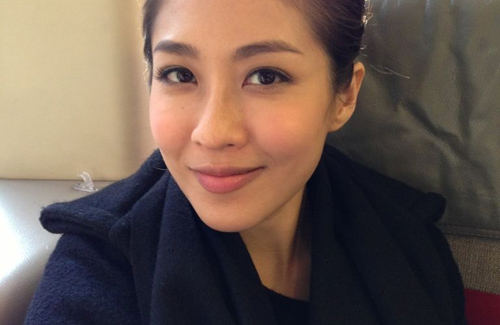 Sharon Chan (陳敏之) continues to show off her trademark long legs in upcoming drama Midas <點金勝手>, though unfortunately was forced to take up unladylike behavior to prevent her tight dress from riding up.

Sharon and Ben Wong (黃智賢) collaborated on a scene for Midas on November 11. Portraying a couple in the drama, they frequently shared scenes with each other and became good friends as a result. The two were filming together once again on last night, though this time their characters have decided to split.

Despite the chilly weather, Sharon remained professional and put on a black cocktail dress that was a bit too short for her height. An experienced actress with a modeling background, Sharon cleverly added a pair of safety shorts though was constantly worried that they were peeking out from underneath.

She was also visibly uncomfortable while walking in the dress. She was seen adjusting it after every take, and at one point even reached underneath to tug at the safety shorts, oblivious to the stares from the male crew standing nearby.

Sharon later sought Ben’s help to make sure the outfit stayed on properly. The two discussed methods to keep Sharon’s safety shorts hidden. Ben also made himself useful by taking photos to view the dress from behind, showing the trust and close friendship that the two share.

Reflecting on the incident, Sharon explained that the dress had caused the safety shorts to ride up as well, prompting her to adjust it constantly. She also confessed that she was unaware of her crude behavior, her mind distracted by the cold temperature.