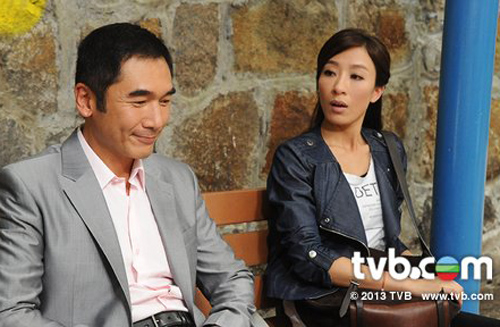 After collaborating in 2007’s The Building Blocks of Life <建築有情天>, Tavia Yeung (楊怡) and Alex Fong (方中信) finally met again onscreen in A Great Way to Care 2 <仁心解碼Ⅱ>. Although they do not portray a couple in the drama, the two brother-like friends have great chemistry both on and off camera.

Due to Tavia’s boyish personality, she and Alex maintain their friendship with playful physical fights. Their relationship is as close as brothers. Tavia recalled the happy times, “Our grudge started while filming The Building Blocks of Life. Every time we met, we hit each other intensely. We played around crazily, and constantly broke the props on set with our pushing and shoving.”

Although the two are fun opponents, Tavia did not deny that Alex has a caring side. While they filmed A Great Way to Care 2 last year, Tavia grew upset over the circulating “car-shaking” incident with Him Law (羅仲謙). As an old friend, Alex comforted her with his words. Although Alex only spoke several sentences, Tavia was grateful of his thoughtfulness.

“I was emotionally fine at the time. I still played around with Alex at work. I felt that I didn’t need to be bothered by something that isn’t true, and should drop everything. When I face my coworkers, they don’t know a lot about the situation. They can only provide me with mental support, but they can’t help me resolve the issue. Anyway, it passed, and I’m not going to care too much about it. It’s not like it’s a big deal.”

Tavia and Alex constantly helped each other out and rehearsed their script dialogue beforehand. However, there were many times when Alex would change the plan once the camera rolled, putting Tavia’s improvisational skills to the test. She praised Alex for his relaxed acting, coupled with his own set of methods. It easily drew the other actors into the correct emotional state. Tavia expressed that the new generation of actors can improve if they learn from Alex.

In turn, Alex praised Tavia for her great acting skills. He believes that she truly deserved winning the TV Queen title last year. Turning to Tavia, Alex said, “Now you have a lot of life experiences, including acting and romantic relationships. If not, then you wouldn’t have been the TV Queen! Actually, dating is a stage in life one must go through. Just don’t lean towards that area the next time you vomit!”

Furthermore, Alex commented on Tavia’s good work ethics. She had injured her foot last year during an outdoors scene, but showed up to work every day although she was limping.