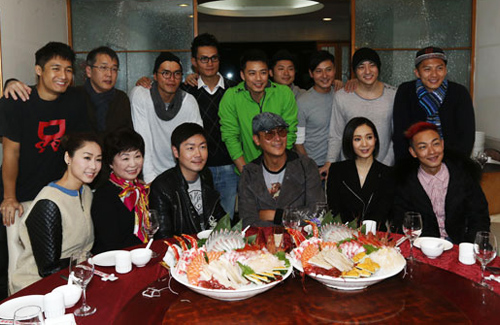 The cast of Tiger Cubs 2 <飛虎II> got together to watch the drama’s finale together. Joe Ma (馬德鐘), Nancy Wu (胡定欣), Grace Wong (王君馨), and Johnson Lee (李思捷) attended the dinner. Although Linda is the female lead, she returned to Canada to celebrate the holidays with her family.

While Joe brought a bottle of whiskey, he has no intentions of leaving the dinner inebriated as he has to fly to Shanghai the next day for work. Signing with a management agency in Mainland China, Joe has been filming with TVB based on a per-series contract.

Joe said, “Tiger Cubs 2 is well-received in Mainland China too. When I went there earlier, many colleagues asked if I would end up with Linda Chung (鍾嘉欣). I haven’t watched the ending yet; I wonder how the producer edited the finale. Hopefully the ratings for the finale will break 30 points!”

Starring as a villain, Nancy happily exclaimed that she has waited ten episodes for her appearance. “I will have many fight scenes with Linda. They are not your typical female cat fights, but rather more rough and combative.”

Having played Joe’s younger sister in Triumph in the Skies <衝上雲霄> 12 years ago, Nancy expressed that they still have onscreen chemistry together. Although they star as enemies in Tiger Cubs 2, Nancy hopes for future opportunities to portray siblings with Joe again.

Receiving more prominent roles recently, Grace expressed that she has been diligently practicing her Chinese to make her performance more natural. With Tiger Cubs 2 receiving more than 8 million views in China, Grace was asked whether she has intentions of breaking into the Mainland market. “I filmed a movie [in Mainland] before. I noticed that cooperating with producers and artistes from Mainland China generated a different kind of spark.”