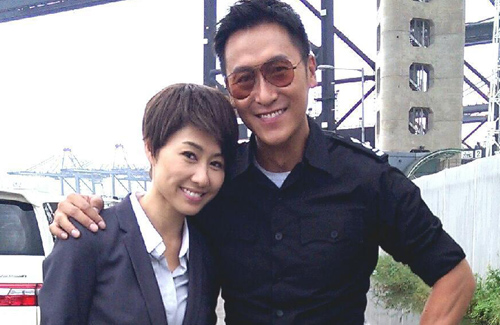 After months of exhaustive filming under the hot sun for Tiger Cubs 2 <飛虎II>, the cast is glad that it is finally over. To celebrate the event, Joe Ma (馬德鐘) forked out money from his own wallet to hold a feast for the cast and crew. The male cast shouted “Delay No More!” for the final time.

Joe happily paid more than $10,000 HKD to hold a feast. Linda Chung (鍾嘉欣) and Him Law (羅仲謙) also sponsored lucky draw prizes.  Since filming of Tiger Cubs 2 began, several cast members were injured due to the many action scenes. To motivate themselves through the tough filming schedule, the male cast came up with the slogan, “Delay No More!” which they would shout during filming to push themselves towards the drama’s completion. Now that filming is finished, the cast was relieved.

Although Joe was once part of the Hong Kong Police Department before he became an actor, he found Tiger Cubs 2 to be one of the most strenuous dramas to film. When asked if he would take part if there is a third installment, he said he would consider after seeing the response of Tiger Cubs 2.

There have been recent speculations that Raymond Lam (林峯) intends to start his own company and has already approached Kate Tsui (徐子珊) to join him. Joe expressed that he also thought of starting his own company, but did not have the time to carry it out. On the other hand, Linda remarked that she has not heard about the rumor, “Raymond has not told me such a personal matter. I also did not know that he asked Kate to join him. I’m still contracted to TVB for several years.”

In other news, reports claim that Christine Kuo’s (苟芸慧) good friend, Eliza Sam (岑麗香) has been taking advantage of Christine’s ballooning weight gain by reducing her fees to appear in promotional events, resulting in a strain in their relationship. However, Christine trusts Eliza and jokingly said that they may consider French-kissing each other to prove that they are not at odds with each other. Christine said, “But after much consideration, we think better not or we may have to French-kiss every time there is a rumor about our fall-out. We have lived together for half a year. I have always been taken care of, but she is the first person whom I have to take care of.”

In order to take care of her mother who has just undergone a surgery, Christine intended to fly to Canada for a holiday. At the same time, she hopes to be able to improve her mental and physical well-being.