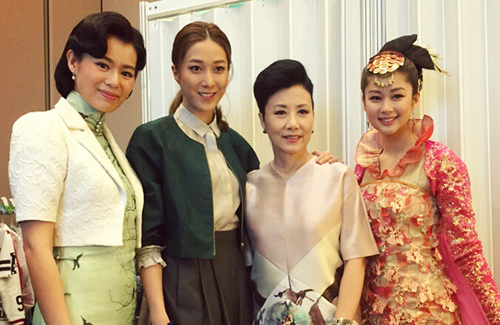 TVB promoted its upcoming productions at FILMART 2015 today.  The cast of The Vampire <殭>, Limelight Years <華麗轉身>, Lord of Shanghai <梟雄>, and the station’s popular artistes were in attendance.

Currently one of TVB’s favorite newcomers, Grace Chan (陳凱琳) secured a spot in the second row, standing next to Edwin Siu (蕭正楠).

Kay Tse appeared in a revealing black dress while promoting for The Vampire <殭>. Although The Vampire marks her TVB debut, Kay’s husband Louis Cheung (張繼聰) helped her research for the role. Kay disclosed, “The staff took very good care of me; perhaps Louis told them beforehand to do so.”

Despite the present of the media, celebrity couple Natalie Tong (唐詩詠) and Tony Hung (洪永城) were unable to hide their happiness and laughed happily at the event.

Although Sisley Choi (蔡思貝) was romantically linked to Him Law (羅仲謙) on the set of Young Charioteers <衝線>, she chatted with Him’s girlfriend, Tavia Yeung.

Ex-lovers, Bosco Wong and Myolie Wu spent the night avoiding each other despite the close proximity. While Bosco glanced at Myolie several times, she did not meet his gaze. Putting her past relationship with Bosco behind her, Myolie is happily dating entrepreneur Philip Lee.