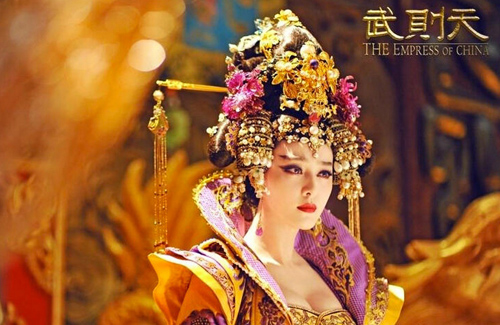 Starting April 27, dramas that are chosen to be broadcast during TVB’s third prime-time slot (between 9:30 and 10:30 pm) will be airing seven days a week rather than the original five days a week. The Mainland Chinese drama The Empress of China <武則天> will be the first drama to occupy this new lineup.

Produced by and starring Fan Bingbing (范冰冰), The Empress of China is about the rise of Wu Zetian, the first female sovereign of Ancient China. The drama features an all-star cast from China, Hong Kong, and Taiwan, including Zhang Fengyi (張豐毅), Aarif Lee (李治廷), Janine Chang (張鈞甯), Chang Ting (張庭), and Kathy Chow (周海媚).  It will premiere in Hong Kong on April 27.

Before, TVB primetime dramas are usually shown from Monday through Friday, starting at 8:00 pm. Weekend prime-time slots are usually occupied by variety programs. After purchasing the broadcast rights of Fan Bingbing’s The Empress of China, which just completed its run in Mainland China, TVB decided to extend its third prime-time slot to seven days a week. However, dramas airing in the first and second prime-time slots will remain unchanged.

Due to the changes in lineup, TVB’s upcoming dramas Eunuchs Leave the Palace <公公出宮> and The Vampire <殭>, which are currently in production, will be getting more episodes than originally planned.

In the past, TVB was airing finales of its popular dramas on the weekends to increase viewership. No Regrets <巾幗梟雄之義海豪情>, starring Sheren Tang (鄧萃雯) and Wayne Lai (黎耀祥), achieved high ratings when the series aired its two final episodes on Saturday and Sunday.

Current weekend variety programs – Sunday Song Bird <Sunday靚聲王> and Johnson Lee’s (李思捷) Sze U Tonight <今晚睇李> – have been raking in high ratings. Johnson Lee said he has heard about TVB’s new lineup plans, and revealed that due to the change, TVB ordered more episodes for Sze U Tonight.