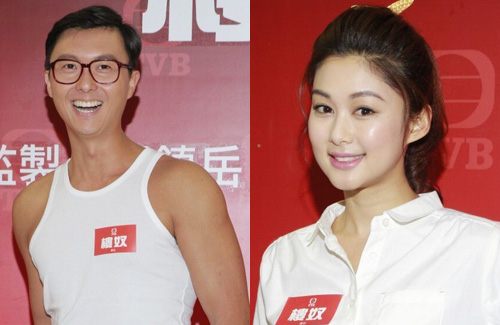 With the recent exodus of its top stars, TVB assembled a fresh cast for upcoming drama Flat Slave <樓奴>. The comedy centers around the difficulties of purchasing a flat amidst Hong Kong’s skyrocketing real estate prices. The series’ theme is regarded as a bridge between TVB’s 2000 drama Ups and Downs <無業樓民> and the 2012 drama, L’Escargot <缺宅男女>.

The drama, produced by Law Chun Ngok (羅鎮岳), features Vincent Wong as a handsome cook who is very popular with the ladies. His girlfriend later breaks up with him due to her materialistic personality. Vincent said he has never met a girl like that in real life, adding, “I am poor myself. Both my wife and I work hard together for our family. We have a lot of people so I need to buy a bigger flat.” Vincent said he is eyeing a 1000 square feet apartment in Hong Kong Island. “I’m saving money for the down payment. Hopefully, I’ll be able to do it in five years.”

Eliza Sam portrays a girl who recently returned to Hong Kong from overseas. Eliza, who is Canadian, said the role fits her background. She also recently visited her own family in Canada. Asked if she plans to buy a flat in Hong Kong, she said she is a frugal person, but will work hard and save money so she can purchase her own property in Hong Kong in the future.

Although Selena Li owns a few properties around Hong Kong, she revealed her goal to save more money so she can move into a bigger home. Selena did not avoid questions concerning her new boyfriend, and even admitted that she does not plan to cohabit with him. She also said they will not buy property together. “A woman should be able to make her own money so she can earn the respect from others.”