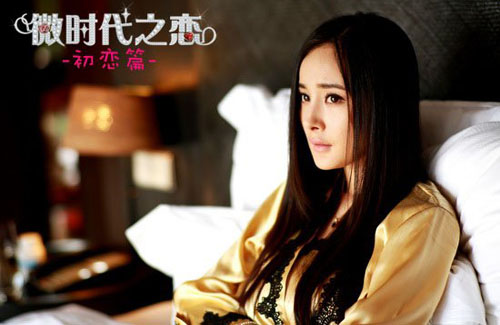 In the upcoming TV drama, Micro Times <微時代之戀>, which is currently filming in Shanghai, mainland Chinese actress Yang Mi (楊冪) will take on the dual role of actress and producer for the first time.

Directed by Liu Yizhi (劉一志) and written by well-known Hong Kong screenwriter Ella Chan (陳寶華), Micro Times will be Yang Mi’s first foray into the entertainment production business. The storyline will focus on a group of post-80s youngsters, who grow up in an age of new media and the Internet and who enjoy a materialistic lifestyle that previous generations would never have even dreamed of.

Although Yang Mi will appear as an international superstar named Luo Yi, Micro Times is focused more on a cast of fresh, up-and-coming actors. The female leads will be Xiao Yuyu (肖雨雨) and Dilraba Dilmurat (迪麗熱巴·迪力木拉提), who graduated from the Beijing Film Academy and the Shanghai Theatre Academy, respectively. Supporting this cast of newcomers are Hong Kong artists Shawn Yue (余文樂) and Monica Chan (陳法蓉), as well as mainland Chinese singers Bibi Zhou (周筆暢) and Tan Weiwei (譚維維).

Recently, Yang Mi shared that, because she is now the drama’s producer, she is more serious than usual when on set. “When you’re an actor, you will often play jokes or tease others on set,” she said. “Now I have to set an example, so I can’t fool around.”  Her responsibilities have also increased as a result: “You have to watch both the costumes and the screenplay, and you have to watch the announcement time. There are a lot of trivial things that need to be done.”

Despite her seriousness, Yang Mi assures fans that she does not get angry and that she is very lenient toward the less experienced members of the cast. “The newcomers are very good, very directed to their work,” she said. “To them, the biggest difficulty is overcoming nervousness. Before our scenes, some actors would tell me that they were nervous, so I would tell them what to do to make it better. I try my best to give them free reign.”

Yang Mi’s boyfriend and frequent costar, Hawick Lau (劉愷威), will not be acting in Micro Times, although he was used as a stand-in actor in a few scenes, since the actor in question was not present and Hawick happened to be passing through Shanghai. However, Yang Mi said that he would be cut out during the post-production stage and that viewers should not be able to see his face in the final result.

Yang Mi also revealed that, because she and Hawick are working as first-time producers for their respective projects, the majority of their conversations when they go on dates will currently revolve around matters that happened on set. Even though the two could now be considered industry rivals, she hopes that they can become “benign competitors” instead.