Yang Mi (楊冪) and Cecilia Liu Shishi (劉詩詩) became close friends after collaborating in 2009’s Chinese Paladin 3 <仙劍奇俠傳3>, and would even go on vacations together. Since Yang Mi is only one year older than Shishi, their close age inevitably led to constant comparisons by others. As their careers and family responsibilities grew, the actresses saw each other less and grew apart. 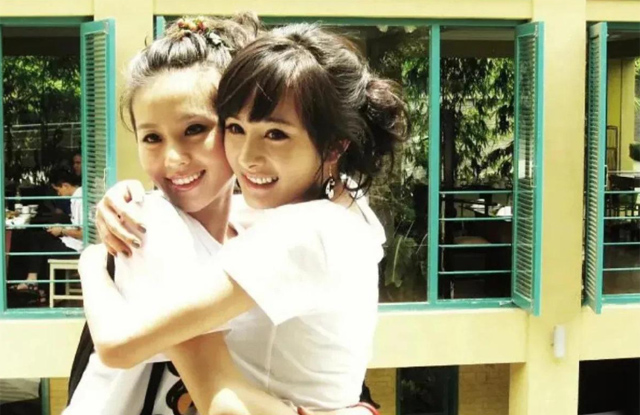 Their distance became obvious when Shishi was not invited as a bridesmaid at Yang Mi and Hawick Lau’s (劉愷威) wedding in 2014. Her bridal party only included one celebrity, which was Tiffany Tang (唐嫣).

Even though they would run into each other at fashion and awards events, Yang Mi and Shishi’s friendship visibly cooled over the years. Netizens nicknamed their relationship as ‘The Plastic Sisters,” alluding to the fact that their relationship seemed great on the outside, but was in shambles and as fake as plastic flowers.

In April, the two actresses reconnected again when Shishi was seen visiting Yang Mi on set. Yang Mi excitedly threw her arm across Shishi’s shoulder as they walked and chatted on the street.

This week, the pair was also photographed visiting a temple, walking and sitting together. Dressed in similar outfits in black clothes with baseball caps, they were seen holding orange plastic bags which seemed to be full of temple offerings.

Netizens praised Shishi and Yang Mi for being down-to-earth, and said they could feel their sisterhood just through the photo!