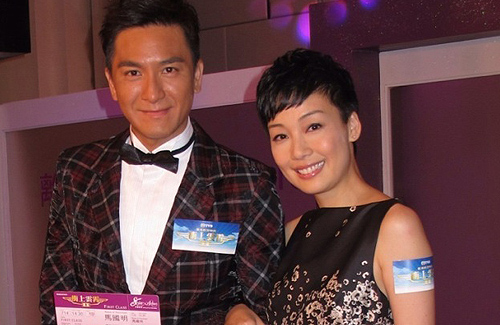 It has not even been halfway through the first week of broadcast, and Triumph in the Skies 2 <衝上雲霄II> is already set to dethrone Wong Cho Lam’s (王祖藍) Inbound Troubles <老表，你好嘢!> as the number one Hong Kong drama of the year.

Triumph in the Skies 2, a sequel to the 2003 drama of the same name, stars Francis Ng (吳鎮宇), Chilam Cheung (張智霖), Myolie Wu (胡杏兒), Fala Chen (陳法拉), Ron Ng (吳卓羲), Kenneth Ma (馬國明), Nancy Wu (胡定欣), Elena Kong (江美儀), and Him Law (羅仲謙). The series, which is a drama about pilots, cabin crews, and operations at the Hong Kong Airport, is a direct continuation of the acclaimed 2003 drama. Triumph in the Skies 2 had over 2 million viewers tuning in to watch the premiere episode.

Kenneth Ma, who reprises his role as senior co-pilot Roy Ko in the sequel, shared that he will have multiple “intense” bed scenes with costar Elena Kong, who portrays senior cabin crew member, Heather Fong. The 39-year-old actor admitted that although he was prepared to cozy up with 41-year-old Elena, he still found the scenes difficult to shoot.

“I already knew that I would have these ‘intense battle’ scenes [with Elena]. I was not embarrassed. Elena and I are close friends. Before we shot them, we had a long discussion about how we would do them and tested out all the camera angles. I also did some homework and watched movies that had similar kissing scenes. I wanted to do well, but [the homework] didn’t help at all! Once the cameras rolled my arms and legs got really stiff. Thankfully, with Elena’s superb acting, we got into the mood really quickly.”

The onscreen couple revealed that their characters were originally friends with benefits, but after going through hardships together, they developed true feelings for each other.

Unlike the 2003 prequel, in which some of the characters experienced tragic endings, the fate of the characters in Triumph in the Skies 2 will be a happy one. The source claimed that there will be no character deaths, plane accidents, or tragic departures.

Captain Sam Tong (Francis Ng), who lost his wife, Zoe (Myolie Wu) to heart disease in the beginning of the series, will ultimately start a new life with pilot trainee Holly (Fala Chen). Holly was in a romantic relationship with Sam’s good friend and rival, playboy Jayden Koo (Chilam Cheung), and their love triangle will be prominently featured throughout the majority of the series.

Co-pilot Isaac Tong (Ron Ng), Sam’s younger brother, meets Summer (also portrayed by Myolie Wu), who shares a strong physical resemblance with Zoe. Although Isaac hesitates in starting a relationship with Summer, the couple ultimately bypass obstacles and end up with each other.

Other couples, such as Roy and Heather, and Coco and Jim (Nancy Wu and Him Law), will also have happy endings.