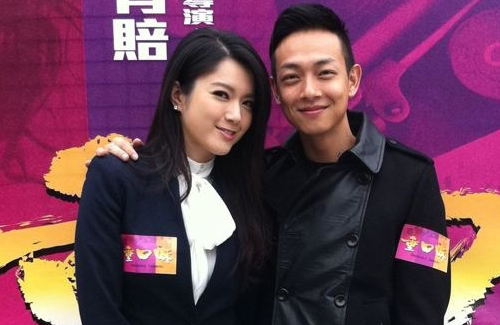 Returning to the film industry with the recent Young and Dangerous: Reloaded <古惑仔：江湖新秩序>, Oscar Leung’s (梁烈唯) make-out scene with two women in a dark alleyway received much attention. Oscar will continue to film daring love scenes in his new movie, Heavy Flavor <重口味>, where he will go topless, don a pair of tight briefs, and reveal a portion of his buttocks.

A regular at the gym, Oscar is very confident in showing off his body on the big screen. Not only will Oscar reveal his good physique, he will have a love scene with three women at one time! He said, “The director gave me several different types of underwear to choose. Eventually, I chose a rather tight pair of underpants, but I don’t need any padding! In any case, this is a comedy, so I’m fine with a little exposure.”

Sharing her first onscreen kiss with Oscar, Christine joked, “He won’t be stripping in his scenes with me. But I’ll definitely go and watch him!”

In the movie, William Chan will play a drug addict. To get into the role, William has to drop 20 kg, which is not an easy feat in itself. What make matters worse is that he is currently busy filming Special Rescue Heroes <特種救援英雄> in which he plays a buff firefighter. With the possibility of both films overlapping, William may not have enough time to drop he weight quickly.

William also has have a stripping scene in Heavy Flavor. Although William possesses good dancing skills, strip dancing will be a new venture for him.