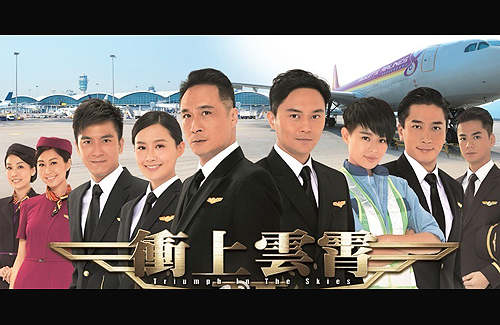 Not long after Sam (Francis Ng) and Zoe’s  (Myolie Wu) marriage, Zoe’s heart condition worsens. Sam quits his job as a pilot to travel around the world with his wife. Unfortunately, Zoe dies, leaving a heartbroken Sam to travel to England all by himself. There, he meets local restaurant owner Manna and stays at her place to take his mind off Zoe. Deciding that Sam has been avoiding his life in Hong Kong long enough, his brother, Isaac (Ron Ng), flies to England to persuade Sam to return.

Sam coincidentally meets Holly (Fala Chen) in England, not knowing that she is actually Manna’s daughter, and comforts her after her breakup with her boyfriend. After talking to Holly, Sam finally accepts Zoe’s death and returns to Hong Kong. Sam joins Skylette Airlines along with Roy (Kenneth Ma), Coco (Nancy Wu) and the residential flirtatious captain pilot, Jayden (Chilam Cheung). Jayden is nicknamed “Captain Cool” due to his playboy-like behavior and clashes greatly with Sam, who has a more conservative personality.

On the other hand, Holly, who successfully passed the test to becoming a pilot, wins the heart of Jayden. Holly sees a resemblance between Jayden and her ex-boyfriend and finally accepts his love pursuit. However, Sam does not approve of Holly yet and remains strict with his mentoring methods. Unfortunately, poor weather conditions caused turbulence during a flight that Sam and Holly led and both were forced to work together to ensure a safe landing. After that incident, both realized how much they had in common and start developing romantic feelings. In the end, Holly breaks up with Jayden to be with Sam, leaving Jayden to be heartbroken for the first time. Jayden is determined to win back Holly, who is caught in the crossfire between the two pilots.

Jayden’s sister, Summer (Myolie Wu), falls in love with Isaac, but he has doubts about accepting her due to her strong resemblance to Sam’s late wife, Zoe. Instead, Isaac decides to pursue Kiu Cho Sze (Kelly Fu 傅嘉莉), a waitress that he met at a coffee shop in the airport. Roy, who is now a co-pilot, begins a relationship with Heather (Elena Kong) despite being her junior. And lastly, one of the highlights for the series will Jim Jim (Him Law) and Coco’s grand wedding in Paris, France.

Filled with romantic relationship arcs, Triumph in the Skies 2, will likely please younger viewers when it airs next Monday.

“Triumph in the Skies 2” Promo Clip