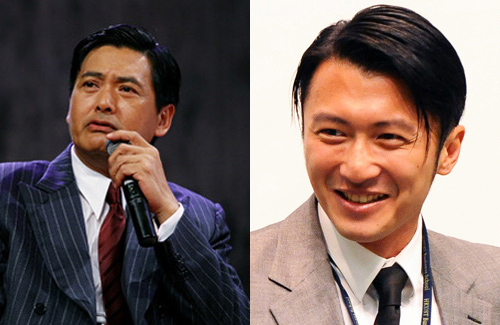 Earlier this week, the cast of Wong Jing (王晶) and TVB’s From Vegas to Macau <賭城風雲> filmed an action scene in a film studio at Yuen Long. Starring Chow Yun Fat (周潤發), Nicholas Tse (謝霆鋒), and Chapman To(杜汶澤), From Vegas to Macau is the fourth installment of the popular God of Gamblers < 賭神> film series, which starred Chow Yun Fat.

Immediately after completing the shoot, which sources say was one of the final scenes in the film, the cast was rushed to do photoshoots for the films promotional posters.

Faye Wong (王菲) and Li Yapeng’s (李亞鵬) unprecedented divorce amount earlier this week shocked the public. Many netizens even hoped that Faye would reconcile with ex-boyfriend Nicholas Tse. Recent rumors even claim that Nicholas, upon hearing about Faye’s divorce, immediately sent a letter to Faye asking to stay in contact.

Speaking about Faye’s divorce with Yapeng, Chow Yun Fat expressed that he has heard of the news, but is not very familiar with Faye. Asked if he pitied the ex-couple, he said, “They must have their reasons. I’m an outsider so it’s not convenient to comment.”

Mentioning that many fans hope Faye and Nicholas would reconcile their relationship, Fat Gor burst into laughter, “Don’t pour olive oil on the floor for me to slide on! I didn’t wear my snow boots! Don’t want to slip!”

Fat Gor revealed that he would be taking a brief break after completing From Vegas to Macau. He further disclosed that he is currently in talks to film a few new movies after his break, in which one of these projects is a local Hong Kong film.

With recent Hong Kong films earning higher box office figures, the industry is experiencing a revival. “I do want to film [a Hong Kong movie], but I need someone to ask me first!” Fat Gor praised Nick Cheung’s (張家輝) performance in the action film Unbeatable <激戰>, saying, “He worked for the results and it was worth it. I admire his will for sacrifice.”