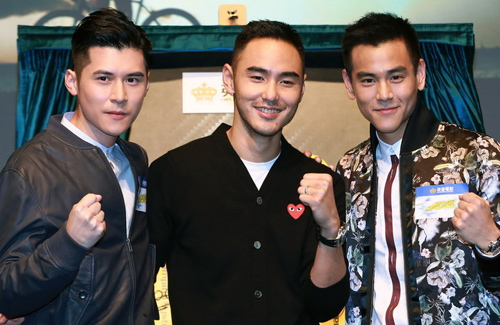 After Eddie and Baihe collaborated in the romantic comedy, A Wedding Invitation <分手合約>, in 2013, rumors sprouted that the on-screen couple had gotten involved in real life and thus sparked hostility from Baihe’s husband, Chen Yufan. Although Baihe and Yufan both already stepped out to denounce the rumors, reporters still insisted on asking Eddie for his take on the events.

At the press conference, Eddie explained, “We were just filming a movie. Perhaps everyone was just too immersed in the story.” His longtime friend and Breaking Wind costar, Taiwanese actor Ethan Ruan (阮經天), jumped in to defend Eddie, saying, “I’ve asked him before. It really wasn’t him.”

When reporters switched the topic to whether or not Ethan had secretly gotten married to Taiwanese actress Tiffany Hsu (許瑋寧), the two actors smoothly played up their own friendship. “Actually I’ve been waiting for Eddie this whole time,” joked Ethan, who explained that the ring that the reporters had spotted on his left ring finger was one that he had been wearing for a long time already.

Ethan went on: “[Eddie] is my best friend in the industry, and I’d worry about him if I left, so I have to be with him. For now, we’re just going to focus on doing a good job of filming Breaking Wind.”

“We’ll give everyone an explanation at the end,” added Eddie.