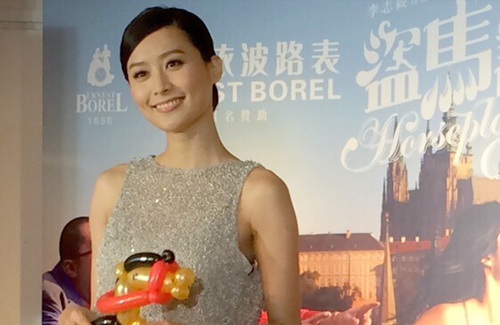 With Francis Ng (吳鎮宇) and Chilam Cheung (張智霖) confirmed to resume their roles in the Triumph in the Skies <衝上雲霄> movie, Fala Chen (陳法拉), who played bubbly pilot trainee Holiday in the drama, also hopes for the chance to reunite with her co-stars in the upcoming film.

Fala left TVB in May 2013 after working for the company for seven years. Wishing to break into the more lucrative film industry, the 32-year-old enrolled into acting classes while taking a break at home in the United States. Soon she appeared in her first post-TVB film, Tales From the Dark 2 <李碧華鬼魅系列:奇幻夜>. Towards the end of 2013, Fala took another extended break to spend the holidays with her family, and announced that she will film Mainland dramas in the new year. Her previously completed Mainland project, The Sound of Desert <星月傳奇>, is also scheduled to air in China in 2014.

Returning to Hong Kong recently, Fala attended a film premiere on March 24 where she spoke briefly about her interest in joining the Triumph in the Skies movie cast. Admitting that she has not been offered a part in the movie, Fala believes that the film version may have a completely different format and story, and would not be too disappointed if she is left out from the casting list. “We have already filmed everything for the drama. I actually think that my character is complete as is.”

Even if she misses out on the opportunity, Fala still gives the film her blessings and hopes that it will be as popular as its small-screen counterpart. Because she is allegedly on bad terms with the crew after arriving to work late while shooting the drama, some believe that Fala has little chance of appearing in the film. In addition, producer Tommy Leung (梁家樹) had earlier expressed that he is considering Mainland actresses for the film’s lead female roles, making Fala’s casting even more unlikely.