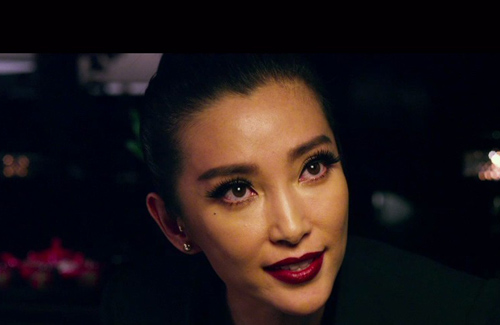 The cast of Transformers: Age of Extinction <變形金剛4：殲滅世紀> arrived in Hong Kong on June 17 to begin a series of promotional activities leading up to tomorrow’s world premiere. Stars Mark Wahlberg, Stanley Tucci, and Jack Reynor all greeted the press warmly at the airport despite their long flights. Excited about her major Hollywood effort, Chinese actress Li Bingbing (李冰冰) shed her usual cool demeanor and appeared cheerful while fielding questions.

The fourth installment of the popular Transformers movie franchise was co-produced with China-owned CCTV6 and its business partner Jiaflix Enterprises. As such, the film incorporated many Chinese elements, including prominent roles for Chinese artistes Li Bingbing and Han Geng (韓庚) in addition to location shooting in Hong Kong. Despite the infamous assault against director Michael Bay last year, studio executives still gave the go-ahead to hold the film’s world premiere event at the Hong Kong Cultural Centre.

Bingbing looked confident and radiant as she arrived in Hong Kong with her six-member entourage. With a hefty role in the film, she spoke about her experience with pride and asked everyone to give her support. Staying in Hong Kong for just three days, Bingbing was immediately rushed to a series of interviews but the hectic schedule did not dampen her good mood.

Meanwhile, her Hollywood colleagues took a more low-key approach for their first day. Mark Wahlberg mostly remained in his hotel to recover from jet lag, though was friendly to reporters when he stepped out for dinner. Stanley Tucci was also polite to the media and thanked them for their presence. Jack Reynor expressed excitement over the film and gave praise to the city. “I think Hong Kong is a very beautiful city. I really want to eat dim sum but I will be very busy, so I may not be able to have dim sum or sight see. However I am very excited and look forward to the film’s premiere.”