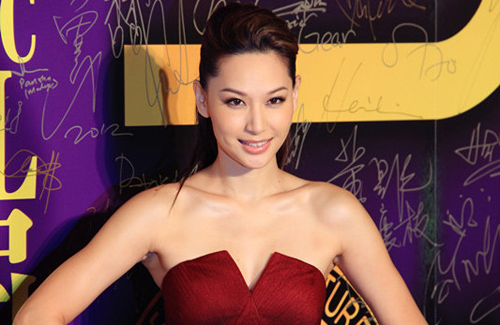 Eric Tsang was the Chairman of the organizing committee for the 55th Asian Pacific Film Festival, which may explain the abundance of TVB artists at the awards ceremony.

Guest performers at the awards included Wilson Chin (錢國偉) and Super Gear who performed the Hong Kong version of Psy’s “Gangnam Style”. Kate Tsui, dressed in a sexy lacy bustier outfit, danced and sang to the song “Nobody” which garnered the most cheers from the audience. Other performances included Eliza Sam and Mathew Ko (高鈞賢) reenacting a scene from the popular Taiwanese film, You Are the Apple of My Eye <那些年，我們一起追的女孩>. JJ Jia and Bro5 performed some acrobatic kung fu moves.

With her usual elegance, Carina Lau wore a black deep V neck gown that captured a lot of attention from the media. Sean Lau’s wife Amy Kwok (郭藹明) also looked gorgeous in her white Greek goddess gown. Although  Denise Ho looked beautiful and feminine in a red evening gown at the Golden Horse Awards, she reverted to her boyish style wearing a leather jacket and pants at the Asian Pacific Film Awards.

The best dressed in the ceremony were TVB actresses, Kate Tsui, Oceane Zhu, and Eliza Sam. The hot favorite to win the title of TV Queen, Kate, looked her best in a beautiful strapless low cut long evening gown, and she did not miss any chance to campaign for more votes during the ceremony. Oceane was the most eye catching artist of the night as she wore a low-cut silver evening gown which revealed her great figure. Eliza dressed in an unique red evening gown that she designed herself. She mentioned that the gown only cost $250 HKD but it turned out to be quite elegant. Eliza said, “I have studied fashion design and know exactly which shop at Sham Shui Po to buy the right fabrics.” With her talent in design, Eliza is considering designing dresses for other actresses, as she had already designed a few gowns in the past. Many winners were not present to accept their awards. One of the notable winners is the Hong Kong film, Life Without Principle, which won the Best Film Award. However, Sean Lau did not win the Best Actor award as he lost out to the Filipino actor, Eddie Garcia who plays a gay pensioner in the film, Bwakaw.

The Best Supporting Actress Award went to the Japanese actress, Makiko Watanabe with her performance as a young divorcee in the film, Capturing Dad.