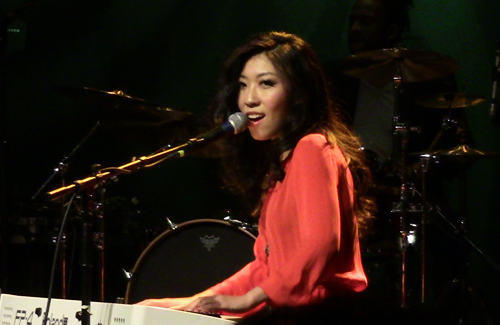 After kickstarting her “Say the Words” North America tour last month, Wanting Qu (曲婉婷) finally arrived in New York City. Belting out her best-selling hits in English and Mandarin, Wanting performed to a full house at Gramercy Theatre on March 12. With a clear passion for live performances, Wanting was at times sassy, witty, and even vulnerable as she sang the pieces that she lovingly wrote.

Following opening shows by Justin Morrell and Dani Atkinson, fans cheered when Wanting took over the stage shortly after 9 p.m. The largely Asian crowd clustered eagerly on the standing room floor of the intimate concert hall, keeping their eyes peeled on Wanting as she opened with “Jar of Love”. She warmly introduced each subsequent song and played the digital piano accompaniment.

Highlighting the three Mandarin songs in her sophomore album, Say the Words, Wanting wrote “Us Under the Sunshine” <陽光下的我們> to raise awareness against cyberbullying. Fans hummed along to her newest hits, “Love Ocean” <愛的海洋> and “When It’s Lonely” <我為你歌唱>, the theme song to the mainland China version of The Hunger Games: Catching Fire.

The familiar sounds of “Drenched” was met with loud applause. Before the love ballad brought Wanting fame, she recounted her days as a struggling musician in “Life is a Struggle”. Wanting told the people who have nothing good to say about others to “STHU”, or shut the hell up. “It’s about saying no to negativity. I’ve actually never said that to anyone in my life, but that’s the beauty of music,” Wanting laughed. The explicit lyrics in “Exit This Way” were inspired by her ex-boyfriends.

Speaking of her delayed start due to the show opening, Wanting said, “I know that it’s been a long wait for everyone, but that’s how we do things here. I’m proud that my music has gotten this far. It’s an honor to open a show for another artist. I used to do show openings too.

“Now, I will sing the song that you all came for.” As Wanting tapped the keys to “You Exist in My Song,”  cameras shot into the air, eager to record Wanting playing the piece that catapulted her to stardom. Wanting joked, “I’m glad I didn’t play this song in the beginning of the show. The next song will be my last for tonight because I have a curfew. Tomorrow, I will be performing in Washington D.C.”

As the concert ended on a joyful note with “Say the Words” at 11 p.m., fans quickly lined up for the ensuing autograph session. Fans were not ready for the night to end yet, but Wanting promised it would not be a long wait before her visit to New York City again.