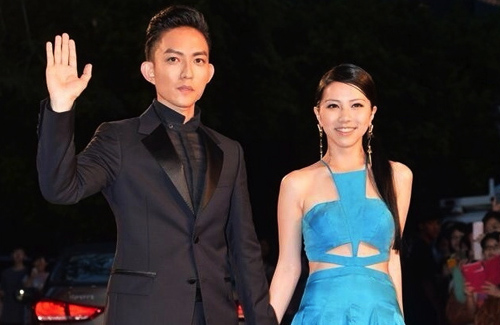 In celebration of the couple’s nominations for both the Best Mandarin Male Singer and the Best Mandarin Female Singer awards, Hong Kong singer G.E.M. (鄧紫棋) and her boyfriend of three years, Taiwanese Mandopop singer, Yoga Lin (林宥嘉) decided to go public with their affections at this year’s Golden Melody Awards held in Taipei this past weekend.

Although it has always been an open secret that G.E.M. has been dating Yoga Lin since late 2010, the pair had always kept a low profile. In December 2010, Yoga came to Hong Kong secretly to meet G.E.M. However, they were spotted by some reporters. Yoga was so annoyed that he attacked the reporters. Though Yoga denied the allegations and G.E.M. has strongly supported her boyfriend, they have since decided to keep their love lives away from the probing public eye.

The lovers easily stole the limelight at the red carpet yesterday when they arrived hand-in-hand. Although G.E.M. wore high heels, their height difference is easily discernible. Dressed in a cut-out satin blue dress, G.E.M. beamed radiantly while Yoga waved cheerfully at the reporters. G.E.M. almost slipped on her long dress while walking up a flight of stairs, but Yoga managed to grab her in the nick of time. Yoga continued to hold her skirt hem to prevent another accident.

In an interview later, the couple expressed their support towards each other. Yoga also sang praises for G.E.M.’s appearance, saying she looked divine and beautiful that night. When asked if they walked the red carpet together in anticipation for their upcoming wedding march, Yoga laughed and said, “I haven’t been married so I don’t know. We just feel it’s rare that we both got nominated at the same time.”

Other celebrities who turned heads at the event include Jolin Tsai (蔡依林), who was surprisingly conservative in her entrance dress. But she revealed her signature sexiness when she put on a short gold tube dress when she got onto the stage to perform her song, “The Great Artist” <大藝術家>, which won the Best Song of the Year award. Jolin awed the audience when she changed her clothing on stage. J

Jolin’s ex-boyfriend, Jay Chou (周杰倫) appeared on the red carpet in a flamboyant suit with a low plunging inner shirt revealing his muscular chest. When he was invited by MC Matilda Tao ( 陶晶莹) to play the piano to open the show, he chose Jolin’s “Heartbreaking Day” <離人節>, leading to many teasing conjectures that he could not forget their love.

Some other guests who made an appearance at the event include Japanese multi-talented musician, Masaharu Fukuyama, who earned many loud cheers from the crowd when he walked in; Christine Fan (范瑋琪); Khalil Fong (方大同); Jam Hsiao (蕭敬騰), Cyndi Wang (王心凌) and Jeannie Hsieh (謝金燕), who unintentionally revealed her long legs when a sudden gust of strong wind blew up her yellow silk gown.