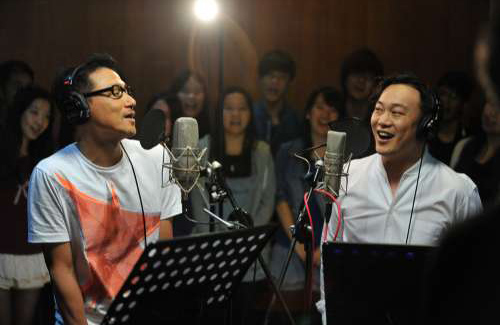 Five new photos from the music video of Jacky Cheung (張學友) and Eason Chan’s (陳奕迅) new single was released on the web today. Their new single “Sail On” <同舟之情> , a promotional song for the Hong Kong government’s new social awareness campaign Hong Kong: Our Home <家是香港>, was released online in early May.

The calming ballad, written by Eric Kwok (郭偉亮) with lyrics by Abrahim Chan (陳詠謙), includes a chorus and melody that was originally written into Roman Tam’s (羅文) 1979 award-winning single “Below the Lion Rock” <獅子山下>. The chorus was later scrapped by producer and writer Joseph Koo (顧嘉煇) in the song’s final production.

As a result, Joseph Koo and late lyricist James Wong (黃霑), who helmed the lyrics to “Below the Lion Rock,” are also credited as co-writers for “Sail On.”

The music video for “Sail On” is yet to be released, but Jacky Cheung and Eason Chan are very eager to present their new collaboration to the culturally flourishing city soon. The two “Gods of Songs” mused about their love and intimacy to their home city. Jacky said, “Hong Kong’s mountain scenery is the most authentic. There wasn’t much media when I grew up, so my entertainment was running around the hills. I am very connected to them.”

Eason Chan, however, finds himself emotionally attached to Hong Kong’s fish balls and ferries. “When I think of Hong Kong, I think of fish balls. And ferries. They leave behind good memories.”

The younger singer said he was “ecstatic” when he heard that he would work Jacky, exclaiming that he waited 14 years for a chance to work with the award-winning legendary singer. “He really is my hero,” said Eason. “I waited for 14 years, and I finally have the chance to produce with Jacky. It’s a dream come true.”

Jacky was also full of praises when it came to working with Eason. “He is engaged and engrossed with the music when he is recording the song. He gets me in the mood.”

12 comments to Jacky Cheung and Eason Chan Release “Sail On”