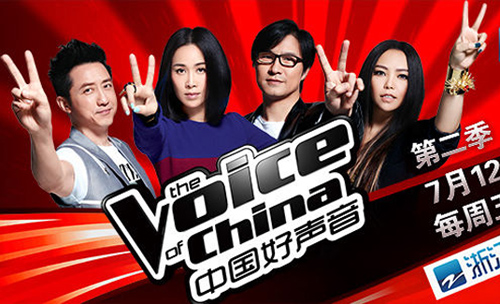 Mainland China’s reality talent show, The Voice of China <中國好聲音>, which produced stars like Summer (吉克隽逸) and Zhang Hexuan (張赫宣), began its second season on July 12. Because of the first season’s success, many anticipate the show’s return and hope to witness the discovery of new talent, as well as enjoy the commentary of the newly formed team of vocal coaches.

The second season of The Voice of China welcomes two new vocal coaches, aboriginal Taiwanese singer A-Mei (张惠妹) and mainland Chinese singer Wang Feng (汪峰). Returning to the show are first-season coaches Na Ying (那英) and Harlem Yu (庾澄慶). In the first episode, which will be broadcast on Zhejiang Satellite TV, the four coaches will entertain the audience by singing renditions of each other’s classic songs.

Apart from the arrival of the two new coaches, another highlight of The Voice of China is contestant Ye Binghuan (葉秉桓), who hails from Lala Mountain in Taiwan. Often compared to a little version of Taiwanese indie singer Crowd Lu (盧廣仲), Binghuan impressed the coaches with his breathtaking note-bending ability. Coach Wang Feng described his performance as “simply unimaginable,” while Harlem likened it to an “out-of-body experience.”

Binghuan’s cheerful personality also captivated the coaches, as did his love for performing. During his time on stage, he even sang an impromptu rendition of the four coaches’ hit songs, causing Wang Feng to praise him, saying, “Whatever group you enter will be lucky.”

Another attention-grabbing contestant is Liu Yating (劉雅婷), known as the “plump little rock ‘n roll girl.” Only seventeen years old and studying to be a children’s teacher, Yating nevertheless possesses an extremely powerful voice, which shocked the coaches when she belted out her first note.

Despite her powerful singing abilities, Yating proved to be somewhat sensitive when it came to her weight and admitted that she felt she was not beautiful anymore after becoming fat. In order to encourage her, the coaches all stood up and encouraged the audience to tell Yating, “You’re the most beautiful!”

5 comments to “The Voice of China’s” Second Season Premieres