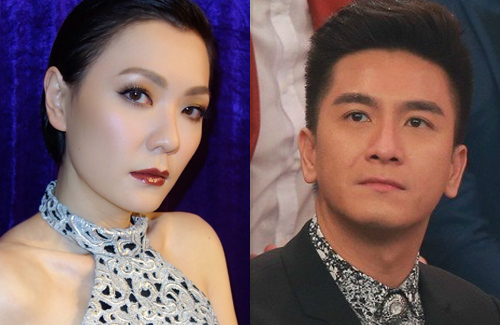 The 2013 TVB Anniversary Gala concluded with a wave of cheers after Kenneth Ma (馬國明) and Kristal Tin (田蕊妮) were voted as Best Actor and Best Actress by their peers on November 19.

Aside from the dance performances, comedy skits, magic tricks, $10 million HKD in cash and prize drawings, TVB announced last-minute that 400 artists will cast votes to select the winners of the Best Actor, Best Actress, and Most Talented Artist awards. The peer voting was TVB’s attempt to draw excitement and increased viewership for the Gala, as the station suffered a wave of mediocre ratings in recent weeks. The outcome of the Gala votes will not impact the official winners of the TVB Anniversary Awards, which will take place on December 16.

The finalists for TV Queen were Linda Chung and Kristal Tin. When MC Eric Tsang (曾志偉) announced Linda’s name, Kristal was ready to congratulate Linda for her victory before it was revealed that Kristal had actually won for her performance in Brother’s Keeper <巨輪>. Surprised by the results, Kristal immediately burst into tears.

Kenneth Ma and Wayne Lai (黎耀祥) were the final contenders for TV King. Kenneth was shocked for several seconds when it was announced that he had beat three-time TV King Wayne in the peer voting. Carol Cheng (鄭裕玲) gently nudged Kenneth before he was able to compose himself and thanked the crowd excitedly.

Veteran artist, Helen Law (羅蘭), received the Most Talented Artist award and thanked her colleagues for their support.

Although Charmaine Sheh (佘詩曼) said earlier that she would be attending the TVB Anniversary Gala, she was unable to make it because she was not feeling well. Chilam Cheung (張智霖), Francis Ng (吳鎮宇), and Tavia Yeung (楊怡) were also absent because other work commitments.

This year’s TVB Anniversary Gala was held amidst the most negative public backlash in recent years, as Hong Kong residents criticized the declining quality of TVB productions while a promising competitor, HKTV, was rejected of its broadcasting license application by the Hong Kong government. Netizens called viewers to turn off their televisions during the broadcast of the Gala, and some even created online funeral signs to mark “TVB’s death”.  However, TVB managed to put on a festive Anniversary celebration with the attendance of its popular stars to support the event.