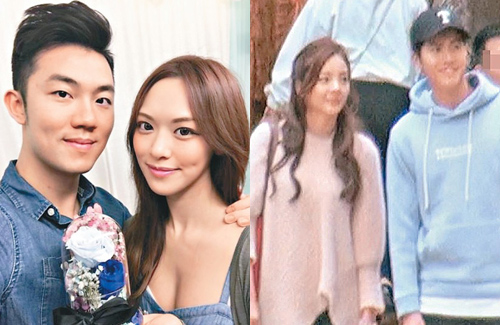 Above: Crystal Fung and Stitch Yu are already in stable relationships.

Although past pageant winners often keep their romantic profiles low, the winners of Miss Chinese International 2017 are already in stable relationships and did not shy away from publicly acknowledging them.

Winning the Miss Chinese International crown, New Yorker Stitch Yu (余思霆), was unafraid of prying eyes and kissed her boyfriend several times on a recent date. Stitch checked out of her hotel and met with a handsome man, who was later identified as Tyrese Au (歐鎮源) from the Korean-influenced Hong Kong boy band, Bird of Paradise (BOP) (天堂鳥). The two were spotted out on a date – walking the streets, shopping, having lunch, and kissing in the car.

In an earlier interview, first runner-up Serene Lim (林宣妤) remained candid and acknowledged her relationship status. As the public’s favorite among the three winners, fans were quick to comment that Serene’s boyfriend was not physically attractive enough for her.  However, the 20-year-old remained protective of him and expressed that “beauty is in the eye of the beholder”.

Third runner-up Crystal Fung (馮盈盈) remained transparent about her relationship status and had revealed during the competition that she was dating a doctor named Martin. The Hong Kong native also shared a photo of the couple on Instagram. Martin is currently a medical resident at the Queen Mary Hospital.