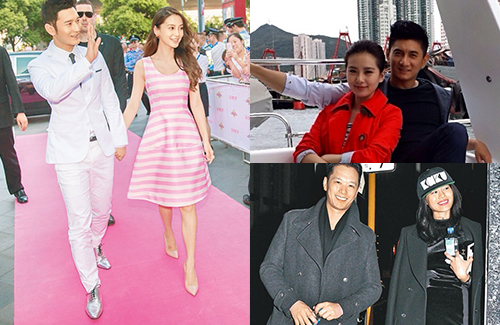 2015 seems to be a lucky year for many celebrities in the Chinese entertainment circle. In addition to a myriad of baby announcements, a significant handful of famous starlets are also announcing their marriages.

Jay Chou (周杰倫) and Hannah Quinlivan (昆凌) started off the year with their fairytale wedding in England, which was then followed by Oscar Leung (梁烈唯) and Tina Lok’s elegant wedding banquet in late May. Former Miss Hong Kong winner Tracy Ip (葉翠翠) announced in June that she would be marrying her longtime architect boyfriend, while TVB actress Rosina Lin (林夏薇) surprised the public with an extremely secretive wedding at one of her husband’s estates in Victoria Peak in late July.

But the celebrity wedding celebrations for the year will not end at Rosina. In January, Nicky Wu (吳奇隆) shared on his Weibo that he and girlfriend Cecilia Liu (劉詩詩) have registered for marriage. Due to work obligations, the Bu Bu Jing Xin <步步驚心> pair do not have time to hold their wedding reception, but Cecilia said in an interview last month that they are currently planning their wedding.

On May 27, Huang Xiaoming (黃曉明) and Angelababy (楊穎) registered their marriage in Qingdao. Reports say that the couple will be holding their 200-table wedding banquet in Shanghai on October 8.

In Hong Kong’s side of entertainment, former TVB actress Myolie Wu (胡杏兒) admitted earlier this year that she has been dating entrepreneur Philip Lee since 2014. Rumors say that Phil successful proposed to Myolie during their vacation in the Maldives, and the couple plan to hold their wedding banquet in December in Hong Kong.