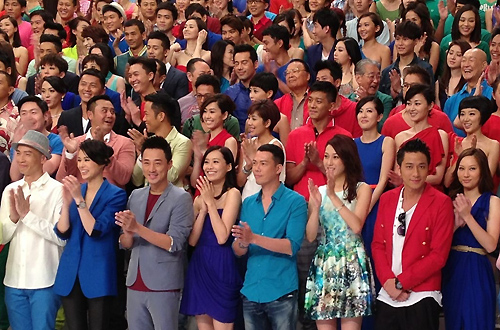 The standing position of TVB artists has always indicated their status within the company. Standing near the center of the first row, Myolie Wu (胡杏兒) has successfully secured her position as TVB’s #1 sister. Regarding her position, Myolie laughed and said, “At least I get to join the party!” She added, “I’m very happy today! I get paid to do this. Unity is strength! I like it when the company organizes such grand gatherings.”

Selena Li Rises to the Top

Standing in the first row between Ruco Chan (陳展鵬) and Raymond Wong (黃浩然), Selena Li’s (李詩韻) status in the company is noticeably more prominent than before. Regarding her rising status, Selena happily said, “I’m so happy I get to stand in the front row!” When asked if Selena wants to win an award this year, she said, “I’ve been nominated for many years. Hopefully I’ll get a chance to win an award this year.”

Jason Chan (陳智燊) joined TVB in 2006, and was cast into his first major role in 2011’s Be Home for Dinner <誰家灶頭無煙火>. He is currently starring opposite Linda Chung (鍾嘉欣) in the upcoming TVB drama Blissful Ferris Wheel <幸福摩天輪>. Standing next to Kate Tsui (徐子珊), this year is Jason Chan’s first year in the front row.

Unlike her ATV friends, Elena Kong (江美儀) and Joey Meng, who are standing in the second row, Alice Chan (陳煒) is currently standing in the third row, next to Eddie Kwan (關禮傑). When asked if she felt neglected by TVB, Alice said, “Nope! I have a lot of jobs!”

Joey admitted that she had met TVB’s boss Charles Chan, but she never requested to be put in the second row. She responded, “That’s not my style!” Asked if her goal is to stand in the first row, Joey immediately said, “I never thought that far! I’m realistic!” In the last few years, many TVB stars left Hong Kong to target the mainland Chinese market, resulting in TVB finding ways to scrounge for new faces. Many of TVB’s previous “second-line” artists, such as Ruco Chan, Selena Li, Jason Chan, and King Kong, have now advanced to the first row.

Sandy Yu’s (余詠珊) favorites, such as Kaki Leung and Priscilla Wong (黃翠如), have also received special attention. Kaki stands in the second row, while Priscilla, the lead actress in TVB’s upcoming drama, Heart Road GPS <心路GPS>, is standing in the center of the fifth row.