Aaron Kwok and Moka Fang Are Having Another Baby 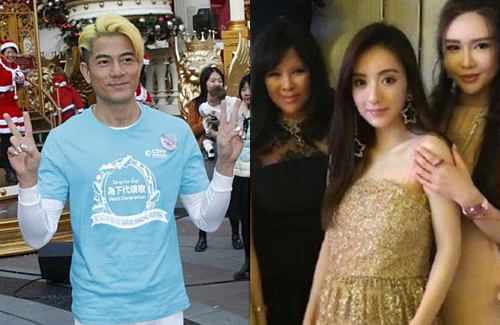 Aaron Kwok (郭富城) and Moka Fang (方媛) have been married for one and a half years. With their daughter Chantelle already one year old, the Kwoks are expecting a new addition to their family.

On December 15, Aaron attended a Christmas event with his sharp yellow hair. He sang songs and took pictures with fans, and many noted Aaron’s friendly and positive personality. After his performance, Aaron talked about his busy schedule during this time of year. However, he does have a two-day break to celebrate with his family.

Aaron wants his daughter to have an unforgettable Christmas by decorating the house and buying lots of presents for his daughter and wife. When he started talking about his daughter, he was definitely very happy. “Chantelle loves to feed me food and I think that is very sweet. She is very good and caring.”

Aaron is already preparing for his daughter’s future as he would collect all her red pocket money and save it for her future funds. Though he may be a famous singer, he expressed that he wants his daughter to have a simple lifestyle. “I won’t purposely buy designer clothing for her. I think children should be simple, and my wife agrees with me.”

When asked about Moka’s rumored pregnancy, he expressed, “It would be nice to have more members in the family. A lot of people have been congratulating me recently, but let’s leave it to God. Just pay attention to my wife’s stomach!” Though he did not admit the news directly, fans believe that Aaron will be a father again.

The news of a second child has already been spreading as Moka’s picture with her friends was shown and her stomach was protruding. Could the couple just be waiting until the pregnancy is more stable?