Despite their prenuptial agreement, Moka’s earning abilities have increased due to her status as “wife of a Heavenly King’’.

Chinese model Moka Fang (方媛) and flight attendant Luna Xuan, who are married to Aaron Kwok (郭富城) and Wilber Pan (潘玮柏) respectively, were linked to an alleged “training camp to marry celebrities” after old photos of them surfaced together. Businessman Wang Sicong (王思聪) had called out the women on Weibo for being social climbers, which led to subsequent exposure of the alleged training camp. While Wilber stepped out to defend Luna, Aaron did not bother to clarify the rumors personally and continued to dedicate loving posts to Moka. Seemingly spoiled in the lap of luxury by Aaron, their marriage however does have practical limits as the couple reportedly signed a prenuptial agreement to address their financial concerns.

As Aaron has a reported net worth of 2 billion Hong Kong dollars, some might expect that Moka would receive quite a tidy sum should they ever divorce. While the couple reportedly has a prenup to protect Aaron’s immense wealth and handle the financial aspects of their marriage, this arrangement still has enough flexibility to not hamper Moka’s lavish spending habits.

Since marrying the former lingerie model, Aaron has been generous and gives Moka a monthly sum of HK$200,000 for her leisurely pursuits. After Moka’s parents moved to Hong Kong, Aaron paid HK$100,000 monthly rent for his in-laws so they can help take care of the couple’s two daughters.

Adding to that the numerous expenditures of the entire family, Aaron spends up to HK$1 million every month to support the family. This prompted Aaron to continue working hard in his career after marriage, holding concerts in nine cities last year. He continues to film movies and is currently hard at work on the filming set of Broken Web <断网>.

By leveraging on Aaron’s superstar status, it is also reasonable to say that Moka’s earning abilities have increased. Moka’s web store business is already doing well, in addition to occasional brand endorsements which she promotes as an influencer. 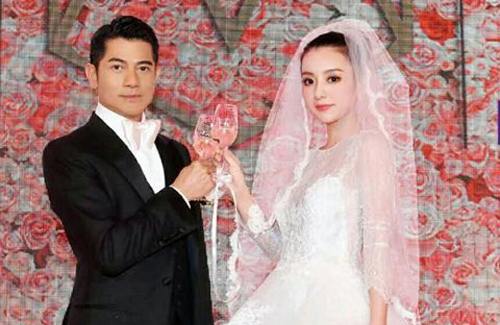