Once a swinging bachelor, Aaron works hard to support the entire family, including his in-laws’ expenses.

Since becoming a father, 53-year-old Aaron Kwok (郭富城) has joined the ranks of daughter slaves. Recently, media snapped photographs of the Heavenly King with his family members at the airport preparing to set off for his concert in Taipei. Seen carrying his daughter Chantelle personally, Aaron danced to his signature moves and even acted cute just to amuse his her.

As his two daughters are still young, Aaron has been working hard to earn money for his family. After completing two concert shows in Taipei, he took the chance to bring his family including his in-laws over for a reunion, while his younger daughter Charlotte remained in Hong Kong.

That day, the family arrived at the airport ready to set off on their trip. Though there were many assistants ready to help, Aaron carried his daughter personally and signaled enthusiastically to her, seeming more excited than the little one about the trip. The trio did not forget to snap a heartwarming family photo together.

However, perhaps due to the large crowd, Chantelle appeared scared and was expressionless despite Aaron doing his best to amuse her. Dressed in simple yet fashionable clothes and a straw hat, she looked adorable with her large eyes and sharp nose.

Putting her down after carrying her on his shoulder for some time, Aaron resorted to doing his signature dance moves to entertain his daughter and successfully attracted her attention. Bending down to hold her tiny hand, both of them then danced along at the airport. Finally, he managed to elicit a sweet smile from her by making cute faces to amuse her.

Ever since Moka’s parents moved from Shanghai to Hong Kong following their daughter’s marriage, Aaron would spend over $100,000 HKD every month to rent another apartment in Dacheng for his in-laws’ lodging needs. This is to make it more convenient for them to take care of Moka and their grandchildren.

He is also in charge of the entire family’s food and lodging expenses. It is no wonder that Aaron has been working so hard, holding concerts in as many as nine cities this year alone. 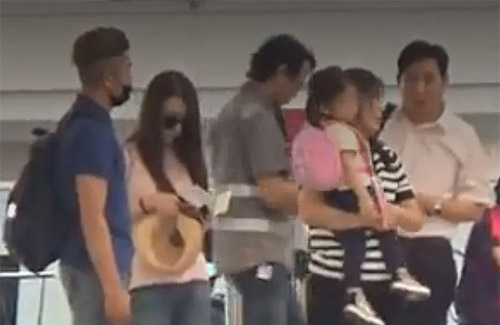