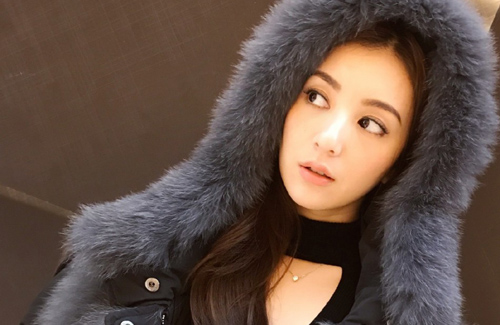 Dating for two years, Aaron Kwok (郭富城) and Moka Fang (方媛) applied for marriage registration last month and will be holding their wedding banquet in Hong Kong in April. Known for his preference for long-legged models, Aaron was attracted by the 29-year-old’s sultry looks and their relationship progressed quickly.

Although virtually unknown before dating Aaron, the majority of Moka’s career was spent as a pseudo-model. Hailing from Shanghai, Moka was previously an underwear model for many e-commerce websites. In 2012, she released a sexy photobook and signed with the management company that worked with Dada Chan (陳靜). At that time, she was even labelled China’s own Leah Dizon.

Moka was also revealed to have been on a reality TV show called, Perfect Dating <非常完美>. Although she was on the show under alias Ai Lisi, fans were quick to figure out that they were the same person. On the show in 2012, Moka boldly admitted to having dated half a dozen times.

Aside from the evident 22-year age gap, Moka and Aaron’s relationship faced backlash, mostly because many regarded Moka as a gold digger. Moka had previously worked at a nightclub in Guangdong and dated Mainland tycoon Wang Sicong (王思聰). However, Aaron came to the model’s defense, firmly stating that everyone has a past and that the past should not completely define a person.

Proving the media and the negative onlookers wrong, Aaron and Moka – who is also reportedly two months pregnant, have already applied for a marriage license. Finally settling down at the age of 51, Aaron’s wedding banquet with Moka will take place in April.

18 comments to Moka Fang’s Controversial Past at a Glance