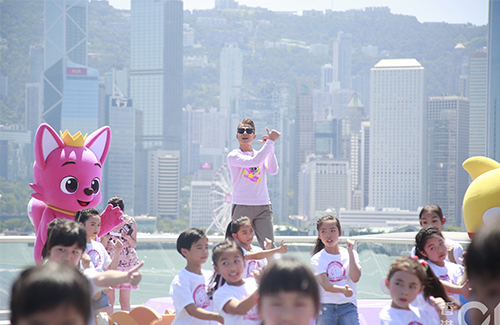 On Sunday afternoon, the 53-year-old singer hosted a children’s event near Tsim Sha Tsui, where a group of young elementary school kids danced to Aaron’s remix of the viral children’s song “Baby Shark”, calling it the “Aaron Style.”

The father of two, who had welcomed his second daughter Charlotte in April 2019, said he didn’t go to the event alone His eldest daughter, 2-year-old Chantelle also came with him, dressed in the same shirt as her father. Though Chantelle did not perform on stage with him, she was standing among the sidelines, happily watching her father dance. 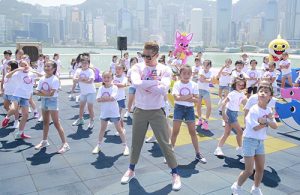 It was Chantelle who had introduced her father to “Baby Shark.” Aaron shared, “That song is legendary. Whenever my daughter is throwing a tantrum, she’ll just go on the iPad, find this song, and listen to it, all on her own.”

Asking if he would be willing to make a formal public appearance with his daughter some day, he said, “I used to be against that idea, but now, it can be considered. I’ll wait until she’s older. (Does she have potential to be a singer and dancer like you?) Oh, of course. She’s taking music classes right now. She’s always dancing at home. She’s always looking for new things to do, and always asking me to take her out. She’s never still, kind of like me.”

Aaron, who will be shooting a film in November, likened life after marriage to entering a “new world”. He hopes to spend as much time as he can with his family before he officially starts work. “My eldest is taking many classes. I was emotional when I dropped her off to school on the first day. I do think it is time for her to learn how to socialize with other people. During Mid-Autumn Festival, I brought her and the rest of the family to Taiwan to watch my show.”

Upon telling Aaron that he was spotted walking in a park with his wife in the middle of the night, he said, “I love walking in the park. When my wife was pregnant, we went all the time. I think it’s very romantic.”