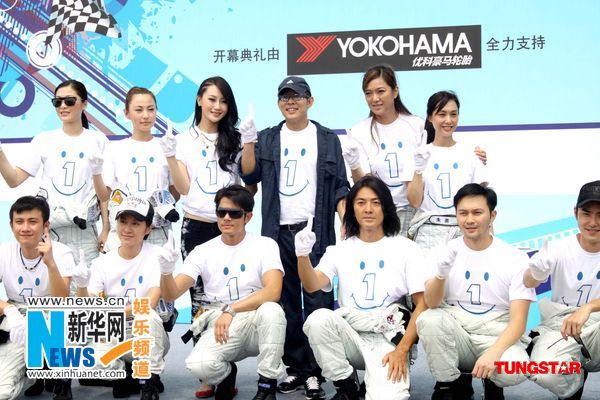 Discussing the racing results afterwards, Aaron said many unexpected variables occurred during the race. “The weather was really hot and the performance of each car was different. My car did not accelerate fast enough and I tried to chase the distance. In the end, I won third place and only lost by a fraction. I am quite satisfied.”

Novice car racer, Annie Liu kissed her trophy and was ecstatic over her victory. “It was beginner’s luck helping me win the championship! My racing position was good and the assistant at the course helped me very much.” Niki looked forward to participating next year again, as the proceeds from the race tournament were for charitable causes.

Chilam’s car tail was hit severely by Annie Liu. He joked that Annie won the women’s tournament only because she had scratched his car. Compiled from the Sun and Singtao

Jayne: Chin Ka Lok is known for his racing prowess and Aaron Kwok loves fast cars. But I’m surprised by the results of the women’s racing tournament. Annie Liu, Niki Chow, and Michelle Ye seem a little delicate in handling these racing cars.