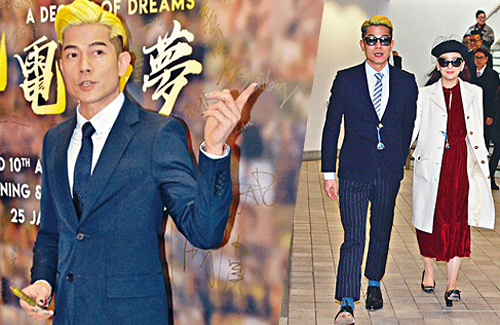 Moka weighs only 101 lbs and Aaron agrees that his wife should eat more as “baby’s health is the most important”.

Aaron Kwok (郭富城), Liu Kai Chi (廖啟智) and his wife Chan Man Yee (陳敏兒), Power Chan (陳國邦), and Wong Hei (王喜) attended “A Decade of Dreams” <十載·電影夢>, AFHD’s 10th anniversary gala screening and awards ceremony. As the guest star at the gala screening, Aaron was asked if he is interested to be a guest advisor to the Academy of Film at Hong Kong Baptist University. He replied that it would not be a problem if time permits,“I will share the knowledge and techniques I have learned in movies with learners.”

Although Aaron’s wife Moka Fang (方媛) is already five months pregnant, she only weighs 101 lbs. He replied, “I am delighted that our home will welcome a new family member soon. I hope my wife would eat more, as baby’s health is the most important,” He replied “yes” when asked if he coaxed his wife to eat more.

Not Confident About Winning Best Actor

When asked about what he thinks are his hopes of winning Best Actor at the Asian Film Awards, Aaron replied that it is already a big encouragement to be nominated and a win would be the icing on the cake. He also seemed to have only viewed Xu Zheng’s (徐崢) performance, out of all the nominees’ works.

As for Liu Kai Chi who won the Outstanding Contribution Award, Aaron sends his hearty congratulations and said that Liu Kai Chi has contributed immensely to the school and helped many young, aspiring filmmakers. Liu Kai Chi expressed his joy at the award but humbly mentioned his own inadequacies, saying he would feel comforted when his pupils achieve good results.

Recently involved in the making of a motivational film in Macau along with Chow Yun Fat (周潤發), Liu Kai Chi revealed that Chow Yun Fat would start running with everyone at 6:30 a.m. every morning. Asked about Alex Fong‘s (方中信) self-revelation that he spewed vulgarities as he could not keep up with Chow Yun Fat’s footsteps, Liu Kai Chi replied, “He’s just exaggerating! He has high expectations for himself, but I don’t.”

Sharing that their group will interact with the local residents daily when they go for tea after exercise, he added, “Jogging will really perk you up! Chow Yun Fat said he will be energized by endorphins after working out, while (Alex) would joke that his ‘man boobs’ get more obvious after the jog due to perspiration.”