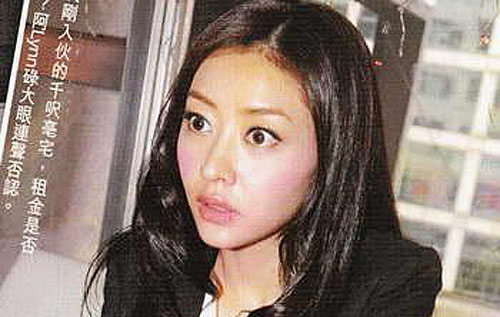 Aaron Kwok Fu Sing and model, Lynn Hung Dai Lam, have been dating for the last four years. Last year, rumors circulated that Aaron cheated on Lynn with Mango Wong Sau Lam. Despite this, Lynn and Aaron remained a close couple. The media has even nicknamed Lynn as “Sing So” (Aaron’s wife).

Aaron appeared to be an attentive boyfriend. During Valentine’s Day, Aaron revealed that he bought Lynn flowers and they went out for a hot pot dinner. The normally low-key couple seems to be publicizing their relationship more prominently lately.

Since dating Aaron, Lynn has surged from a little-known Nanjing model to a top model in Hong Kong. She often has cameo roles in movies and her recognition have surged in recent years. Allegedly at a recent Italian jewelry promotional event, Lynn was treated very well by the staff in attendance. Meanwhile, other models such as Ana R., Jessica C. and Jocelyn were treated with less care. Since no one was paying attention to her, Jocelyn even laid down on the floor to take a brief nap while backstage.

Jayne: Lynn and Aaron make a good looking pair. Do you think long-time bachelor, Aaron, will follow Leon Lai’s footsteps and get married soon? Do you think Lynn will become the next Gaile? Leon seems to be more bold in his relationship choices…