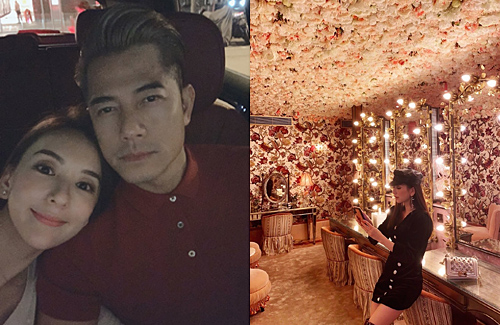 Rumored to be chasing a son, Aaron Kwok is pulling in all stops to indulge his wife.

After Aaron Kwok (郭富城) and Moka Fang (方媛) got married in 2017, they had their two daughters Chantelle and Charlotte. When his younger daughter was born in May this year, the 54-year-old superstar stated that he would put a hold on baby-making plans for the time being. However, Taiwanese media recently reported that Aaron has been thinking of having a son in order to please his aged mother, and has been pampering Moka with generous gifts as a reward for childbirth.

According to the reports, Moka has revealed to a close friend that Aaron has never gifted her any branded bag worth more than $100,000 HKD in the past. But he recently gave her a luxury-branded handbag worth $120,000 HKD, with the promise of another million dollars’ reward after the birth of the child.

Since Aaron is keen on a son and Moka is only just 32 years old – which means she is still far from the high-risk pregnancy age bracket – it should not be challenging for her to conceive another child. Moka also wants to have another child while she is still young, and the couple has especially gone for checkups. They have been consulting close friends for secrets to conceiving sons so they can fulfill their wish with one more try.