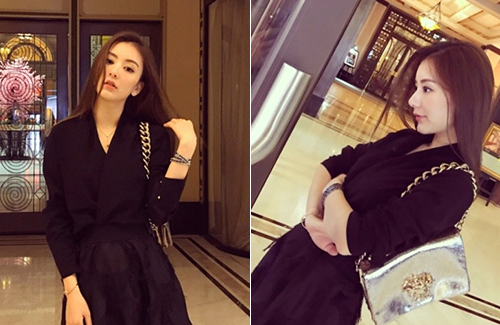 Aaron Kwok (郭富城) and his relationship with 28-year-old Moka Fang (方媛) is steady and strong. The couple, 23 years apart, have been dating for over a year.

Though Aaron and Moka decided to go public with their relationship, they still maintain relatively private lives, and their secretive romance leaves much room for speculation. A recent post by Moka is making rounds in the Internet, as many netizens claim that the Shanghainese model seem to be hinting at her own pregnancy.

Moka uploaded several photos of herself wearing a long black dress, and wrote, “I am slowly resurrecting. Third day of work after vacation. Hopefully in the New Year [I] will continue to work hard and add oil, becoming a better version of myself. Can you spot a small difference in me?”

According to netizen speculations, this “small difference” mentioned by Moka could possibly be a bulging belly, which could be seen through her black dress. Netizens also noticed a male hand reflected on a mirror in the picture, leading to speculation that it was Aaron who took the photos for her.

Aaron hasn’t made any comments about the pregnancy speculations. The actor-singer is currently in Mainland China doing a film, and is unable to be reached for comment. However, the 51-year-old did express interest in having children. When he was asked about having his own family in an interview earlier, Aaron responded with a smile and batted his eyelashes.