Ada Choi to Give Birth in October 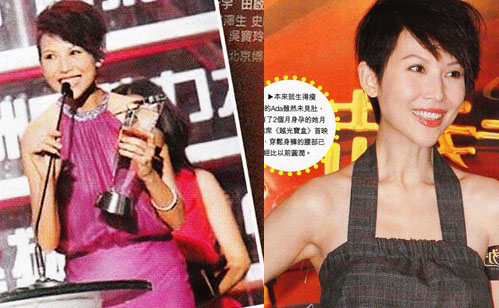 Following good friend Gigi Lai Chi’s pregnancy, Ada Choi Siu Fun was also rumored to be pregnant. Ada dated mainland actor, Max Zhang Jin, for  four and a half years before getting married in January 2008. Allegedly, Ada is currently two to three months pregnant and the delivery date will be in October 2010!

Inside sources reveal that Ada has already paid a $20,000 (HKD) deposit at a Hong Kong hospital, to reserve a private patient room for the upcoming October delivery of her baby. Due to its location in Happy Valley, its spacious accommodations and tight security, this hospital is especially popular among the Hong Kong elite and artists. Cecilia Cheung Pak Chi, Monica Lo Suk Yee were former patrons. Tycoon, Richard Li, and girlfriend, Isabella Leong were also rumored to reserve a room within the hospital for Isabella’s October delivery of her boy-girl twins.

On March 28th, during an awards ceremony in China, Ada wore a pink evening dress, which revealed a small bulge in her belly. Compared to photographs taken two weeks ago, it was obvious that the baby bump was growing bigger.

Since Ada was rumored to be afraid of complications in her first trimester, she has denied pregnancy rumors thus far. In two months, her changing figure should be an indication of the baby she is carrying.

Jayne: Although the pregnancy rumors are yet to be confirmed by Ada, I have a feeling this one is going to be true! Every actress in Hollywood and Hong Kong seems to have caught the baby bug. Everyone is getting pregnant!

Congratulations to Ada and Max Zhang! Hope Ada will have a daughter just as beautiful as mommy!

3 comments to Ada Choi to Give Birth in October