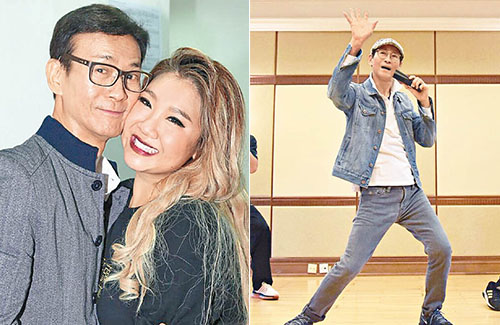 The 70-year-old performer, who started his career in the late 60’s, will kickstart his tour with two shows in the Hong Kong Coliseum on May 28 and 29. The concert, titled “Adam Cheng Half Century, Great Era” <鄭少秋半世紀．大時代> will feature guest performers such as David Siu (邵仲衡), Michael Tao (陶大宇), and Derek Kok (郭政鴻), his costars in the classic 1992 drama The Greed of Man <大時代>. Adam’s daughter, Joyce Cheng (鄭欣宜), will also be performing.

According to Hong Kong sources, Joyce turned down some lucrative jobs in order to leave room in her schedule for her father’s concert. It’s been estimated that she lost over seven figures.

The 29-year-old originally said no to performing at her father’s concert. Lamenting at her unlucky schedule, Joyce joked that she probably won’t be able to do it until her father’s 60th anniversary. However, after much thought, Joyce decided to sacrifice the money for her father.

“I can’t miss my father’s 50th anniversary,” said Joyce. “It’s a moment worth remembering. I really want to take part in it to support him. After discussing it with my agency, they agreed with my decision!” (How many jobs did you have to turn down?) “Some! Some jobs were moved around.” (Lost up to seven figures?) “Let’s not talk about that!”

Joyce’s manager, Stephen Shiu Jr. (蕭定一), said the losses to the company were worth it. “The company definitely supports Joyce’s decision. It’s Chau Goon’s 50th anniversary concert after all, and this opportunity is hard to come by for them. This is more important than money.”

As for his daughter’s losses, Adam said his skin aches for her. “It’s painful! But I am very moved by my daughter’s sincerity. It’s a pity that we don’t get many opportunities like this, where father and daughter can perform on the same stage together. I didn’t expect Joyce to say yes until she called me!”

Adam then revealed some details about his concert, sharing that his daughter will be performing her hit single “Goddess” <女神>, but with a twist. Adam also shared that he will be performing some fast songs. Asking if one of the fast songs would be “Hong Kong Ryouri” <香港料理>, the song that led to the meme about Adam being the founder of K-pop, Adam joked, “I’m honored for being called the founder of K-pop. I have been rehearsing some dance numbers, and doing a lot of aerobic exercises. We’re putting all our heart into the choreography!”