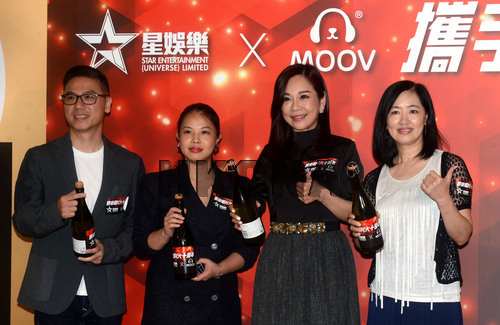 The 48-year-old was the surprise guest at Star Entertainment’s press conference yesterday, announcing that she has officially signed a contract with the record label and is in the early stages of preparing an album and a world tour.

Adia, who hasn’t been in Hong Kong for four months, will only be staying in Hong Kong for three days. She will soon return to Suzhou for her musical tour. Her husband, 39-year-old actor Zhang Duo (张铎), has been on the road with her to keep her company.

“He came to Shanghai to help me out,” said Adia. “We don’t want to stay apart for too long. There was a time when we were apart for two months, but we wouldn’t do that again. It’s not very healthy. We’ve consulted many married couples, and they all agreed that it isn’t healthy to stay apart for that long. Fortunately, both of us are willing to be each other’s ‘ah sei’ (servant)!”

While Adia would make soup, her husband would help her message. She said, “And he would give me a foot massage! Extra points for him!”

As for whether or not Adia also plans on making a full comeback to the music industry, she said, “I want to make music in a way where it’s not all about money.”