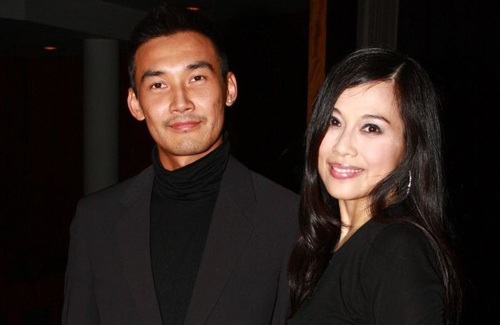 Adia Chan (陳松伶) joined TVB 33 years ago, before deciding to leave in 2005. However, she came back as the female lead in The Ghetto-Fabulous Lady <福爾摩師奶>, in which she received high praise for her acting. For her success, she really wants to thank her husband Zhang Duo (張鐸), who is eight years her junior, for his constant support.

During Adia’s time at TVB, she never received any awards so she eventually left the station to pursue outside opportunities. During the time, there were rumors that Adia was suffering from depression, which caused her to leave, in which she responded that she took care of herself mentally and physically. She shares her story of how she met her husband during this time.

“I am a Christian, and I like to read so I was able to learn a lot and see many things in a different light. Luckily for me, I was actually going to Shanghai for work and that’s when I met Zhang Duo. He gave me a lot of space and helped me through a time when I sometimes didn’t want to see anyone or even go outside,” Adia said.

Though their age difference made the public skeptical of their relationship, and she herself had doubts, Adia eventually accepted Zhang Duo’s proposal. During their marriage and time together, they started forgetting about the age gap and instead she constantly compliments her husband for being such a great man because they are comfortable with each other and would help each other grow.

She shares that Zhang Duo calls her “baby”, and there is high transparency in their marriage. They know each other’s passwords and have many shared accounts. She said, “We really trust each other and don’t mind if we know each others secrets.”

In regards to children, she wants to leave that to fate, but hopes that she can have a child in the next two years. At the moment, Adia is very grateful for everything in her life and isn’t scared of obstacles anymore.  She urged others to not lose confidence in themselves.