Ali Lee (李佳芯) is speculated to have a special mysterious man in her life. Since becoming single again last year, she has been linked with rich businessman Mark Chan (陳恩德). After the actress said future developments with Mark “are impossible,” TVB host Leonard Cheng (鄭衍峰) is said to be Ali’s newest beau!

A netizen snapped a photo of Ali eating with a mysterious man on November 27, which is the actress’ 39th birthday. Although only half of the man’s face is visible, his eyes and hairstyle resemble Leonard. The woman in the photo is believed to be Ali, as she had uploaded a photo of herself dressed in the exact same outfit on her birthday. 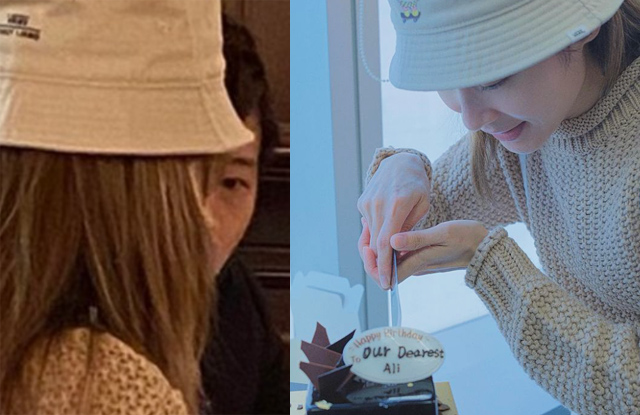 Ali and Leonard appear to be an odd match, as they seem to have nothing in common and she is also older by nine years. Ali has never been one to care for looks, which is why she stayed with her ex-boyfriend Danny Chan (陳炳銓) for seven years. Although Leonard is not considered classically handsome, he has a lot of talent and is versed in many areas including theater production and hosting.

Growing up in Vancouver, Leonard graduated from the University of British Columbia in 2013 and worked as a host for Fairchild, a Canadian Chinese television and radio station. In 2016, he signed a contract with TVB and returned to Hong Kong and has been developing his hosting and acting career since. Possessing a fit physique with a 43-inch chest and dubbed as a sweet talker, Leonard has been linked with Crystal Fung (馮盈盈) after visiting her home.

When reached for comments, Leonard said, “I have never dined with Ali. We only see each other at work, and I have no intention of pursuing her.”

Ali also denied eating with Leonard, and said that she does not know him. Reporters asked who the mysterious man is, and she said that he is a regular friend. “There have been a lot of speculations about my love life recently–thank you for your concern.”