Sidewalk Scientist <學是學非> graduates Ali Lee (李佳芯) and Mayanne Mak (麥美恩) are back on scene together for the upcoming TVB drama AI Rhapsody <智能AI（愛）人>, which has already commenced filming. It’s been seven years since Ali and Mayanne last collaborated onscreen. The close friends immediately found their chemistry again when the cameras rolled.

AI Rhapsody stars Ali as a cyborg who grows more human as she learns to live amongst people. In the scene pictured above, Ali delivers afternoon tea to her master, played by Mayanne, who is a famous TV actress. Mayanne had wanted to treat the cast and crew to an afternoon snack, but Ali struggles to deliver the goods to Mayanne in time. Disappointed with Ali, and embarrassed by Ali’s messy outfit, she shoos her away.

It isn’t easy to play a cyborg. Ali struggled to find the fine lean between human emotion and stiffness. The most difficult thing was to find that balancing rhythm. “It’s only been four days [since filming started], and I still have a lot of things to improve,” said Ali. “But I really find this role refreshing and I’m enjoying every moment.”

On working with Mayanne again after seven years, Ali said, “We’ve all grown older. As an MC, she has great memory and very confident in front of the camera. She picks up things really fast!”

Playing only bit roles since her debut in 2011, Mayanne’s focus has always been on MC work. She landed her first major role for Line Walker: Bull Fight <使徒行者3>, which is set to premiere this year. Mayanne will also star in the upcoming Armed Reaction 2020 <陀槍師姐2020>. 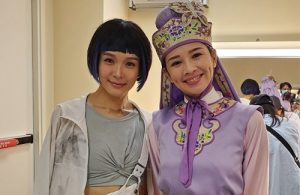 “It’s always been a little dream of mine to do a little acting work on the side,” said Mayanne. “When I’m chatting with my colleagues, often times I find it hard to relate to them because they’re always talking about their acting jobs. Now I get to chime in. (What’s the difference between presenting and acting?) As an MC you need to have energy and good memory. As an actor, you also need to be able to handle your emotions well.”

Mayanne said it has been difficult to pull herself out of character when she has an emotional scene to film. “You must find a balance. I’m learning,” she said.

Pointing out that netizens have been referring Mayanne as Sandra Ng’s (吳君如) successor, she said, “I’m not worthy! Though many people have come to me to say that it’s been many years since they’ve last seen a comedic actress. I’m happy and grateful. But my wish is to be the sexy one, haha!”