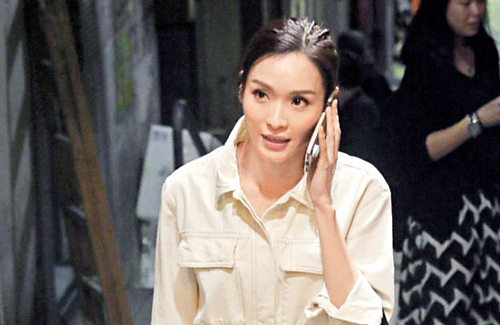 After signing with TVB in 2012, Ali Lee (李佳芯) has been given many opportunities and memorable roles. She began to receive attention for her acting after starring as a villain in Overachievers <名門暗戰> and became a household name for her breakthrough role in Legal Mavericks <踩過界>. Ali continued proving her potential as a lead actress and became a hot favorite to win the TVB Best Actress award this year due to her believable portrayal of a new mother in Who Wants a Baby? <BB來了>.The 2018 TVB Anniversary Awards ceremony will take place tomorrow, and Ali’s biggest competitors are Mandy Wong (黃智雯) and Alice Chan (陳煒). Despite being a hot favorite, Ali may have inopportunely ruined her chances of snagging the Best Actress award.

It was rumored that Ali upset many TVB higher-ups after rejecting to portray the lead role in the new TVB drama, After the Disaster <禍後>. An insider revealed, “Actually, Ali had already looked over the script and promised to film the drama, but she suddenly changed her tone and said she wasn’t going to film it. She said it was because the character is a mother with a toddler daughter, and she didn’t want to portray a mother again. On the other hand, it was said that the first lead male was going to be Frankie Lam (林文龍), so Ali felt that they did not look physically compatible. But it’s obvious these are all excuses!

“Actually, it’s because the drama will be filming through Christmas and New Year and will go on for several months. This locks up her time and she is unable to go out there and make real money [through show appearances and events]. Now, Ali’s asking price is much higher and is a popular choice among sponsors. She’ll lose out on a lot of money, so she decided against filming the drama. This decision angered a lot of people. Ali has always been very obedient [to TVB] and has never acted this way before. Perhaps because she’s more popular now, her attitude has changed. Maybe she feels that she can have a say in things now. She didn’t think the consequences could be so disastrous!”

Mandy beat out her competition and won the My Favorite Actress Awards in Malaysia and Singapore. It is often believed that these awards were consolation prizes and, therefore, sets up Ali to ultimately win the TVB Best Actress award. An insider shared, “It’s rumored that Mandy got the Malaysia and Singapore My Favorite Actress award, so TVB will crown Ali as the TVB Best Actress. As for Alice, she has never been one to fight for awards, so it doesn’t matter to her whether or not she gets it. Everyone thought Ali will be a sure win, but the tides have changed. Ali rejected TVB’s drama, surrendering her chance. She also knows there’s no saving it now. It’s between Alice and Mandy now. They both have their supporters. We really don’t know who will get it now in the end.”

5 comments to Ali Lee Lost Her Chances for TV Queen?