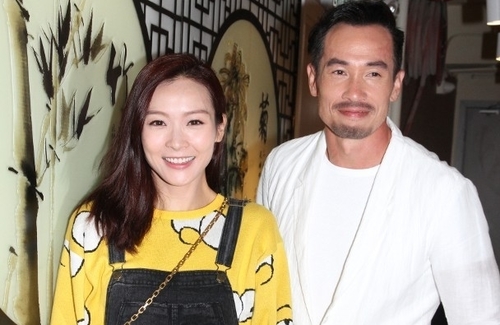 Following last night’s 2018 TVB Anniversary Awards, the newly crowned TV Queen, Ali Lee (李佳芯), made her first appearance at a dinner gathering for the TVB drama Assassin <殺手> since taking home the Best Actress award. The 36-year-old was notably still very excited about her big win and shared her experience with the reporters.

“Having a solid award does make a difference,” the TV Queen noted. “But I think I was more nervous last year compared to this year.”

Even so, Ali expressed she’s happy about the prize and has been ecstatic since her name was announced. However, she didn’t really get to celebrate with her boyfriend, Danny Chan (陳炳銓), because she got home between 1 a.m. to 2 p.m. after meeting with her fans.

“He already bought a cake in advance – one was a cake, and the other was a fruit tart,” Ali shared. “He messaged me saying if I win an award, it’ll be a piece of cake, so I’ll get to eat the cake. But if I ‘ta q’ (fail), I’ll eat the fruit tart. I don’t know if this is considered romantic.”

Hearing Danny’s fruit tart pun, Moses Chan (陳豪) burst out laughing on the side. He happily exclaimed, “I need to learn from him! It’s almost like a drama.”

However, Moses has always been known for his sweet gestures towards his wife, Aimee Chan (陳茵媺). In fact, he will be spending a hot Christmas in Australia with his family after arranging it for a long time. “It seems like I can never finish filming,” the actor remarked. “The action scenes [in Assassin] are a little more complicated.”

On the other hand, Ali revealed she will begin filming her next drama in April and will film a reality show in between now and then. “I need to take care of my health first,” she said. “It should be better when I get to sleep a little more.”

She also shared she will be going for a checkup in January after she’s done taking her herbal medicine.